Most of us just know the honeybee. Still, there are far more species than just this one. The other species are summed up by the term “wild bees” which does not refer to the archetype of the honeybee before it was domesticated by beekeeping, but they are totally different species.

Wild bees have an enormous diversity in their appearance and their ways of life. They come in numerous shapes, sizes and colors. There are an estimated 17,000 wild bee species worldwide. There are more than 2,500 wild bee species just in Europe and about 560 of them are living in Germany – these numbers include bumblebees. 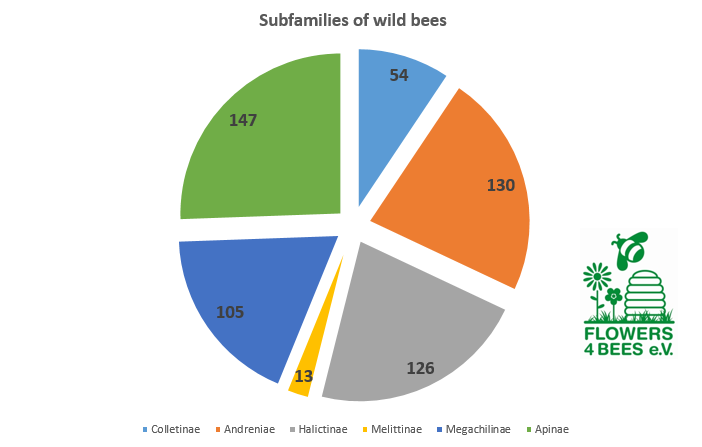 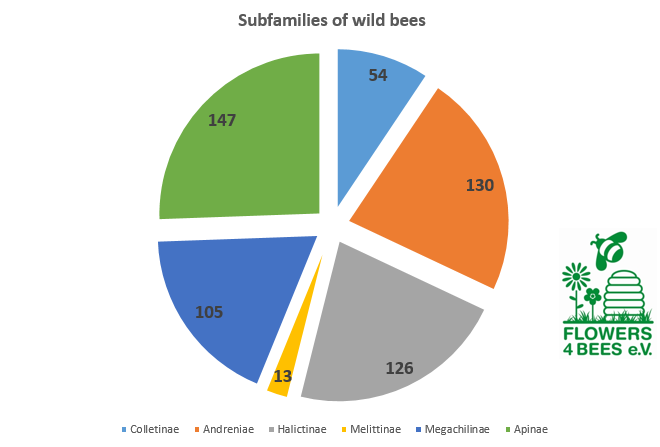 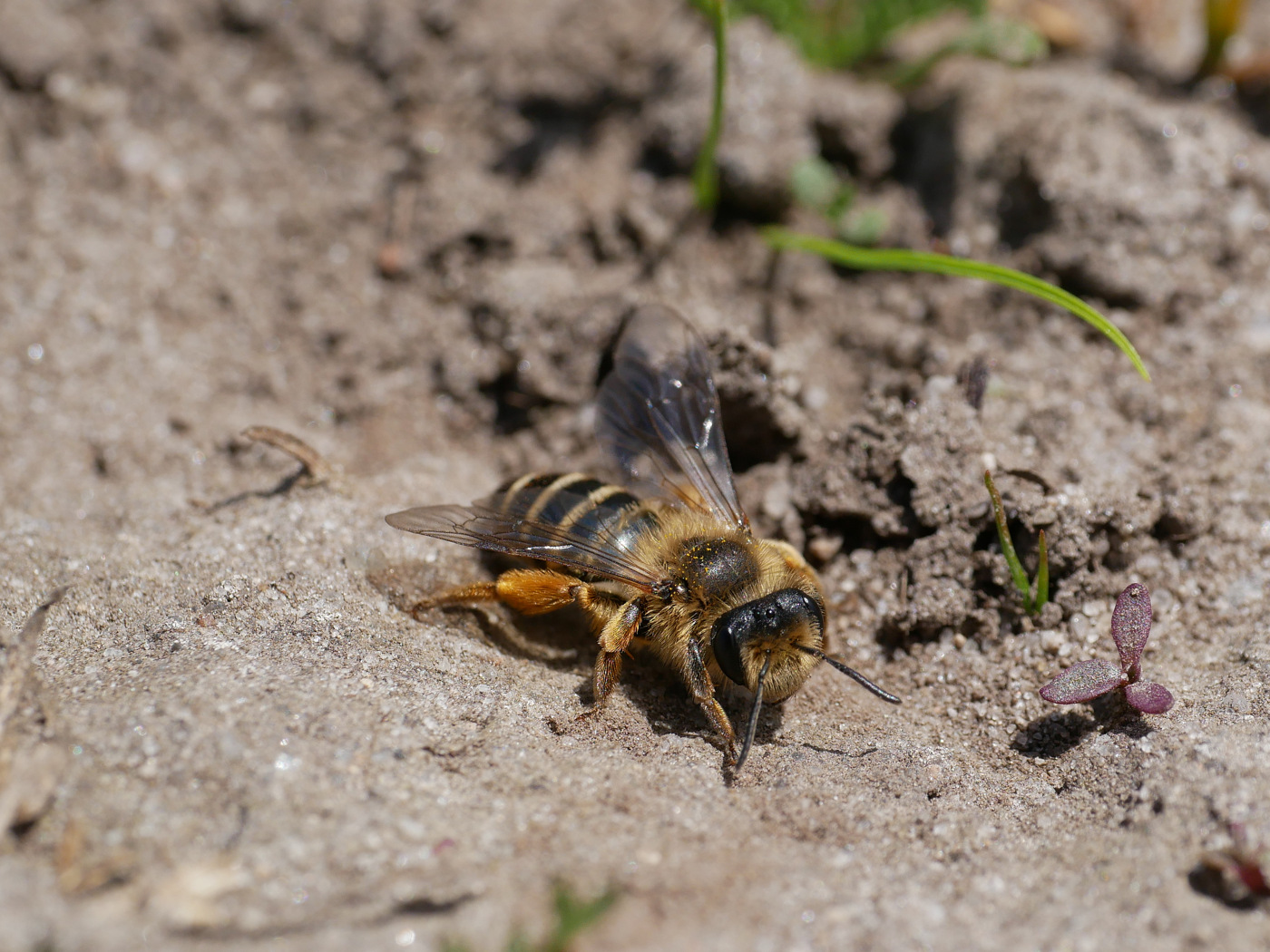 How to recognize a wild bee?

It is not easy to identify insects. First you should be able to differentiate from a wasp or a “mimicry” like a hoverfly (you can find a comparison of these pollinators here). After this, you can start to distinguish between honeybees and wild bees. As a beginner, it is easier to identify the wild bees by excluding the honeybee. Honeybees have particularly distinctive eyes, hind legs, and a banana-shaped radial cell on their wings that make them easily identifiable, at least in a photo like this one.

Another important criterion, which can be used to identify a honeybee and to rule out any confusion, is the size of the bee. Honeybee females are around 12 mm long. So in general, you can say, that all significantly smaller or larger bees can be identified as wild bees. In addition, an observable nesting site like in a bee hotel, in cracks in walls, in the ground or in similar locations, can clearly exclude a honeybee. Normally, the honeybee lives in the beehive with her colony.

If you got a little practice, not only the behavior but also the appearance can be used for identification. The male native wild bee species are often slimmer and smaller than the females. Their antennae are usually visibly longer and have 13 segments instead of 12 like those of the females. A major difference is that they do not have a pollen transport device because they do not participate in collecting food for their offspring. Females can be recognized by their unique hair textures on the head, abdomen and legs, which are often loaded with pollen.

Furthermore, wild bees are characterized by the following characteristics: 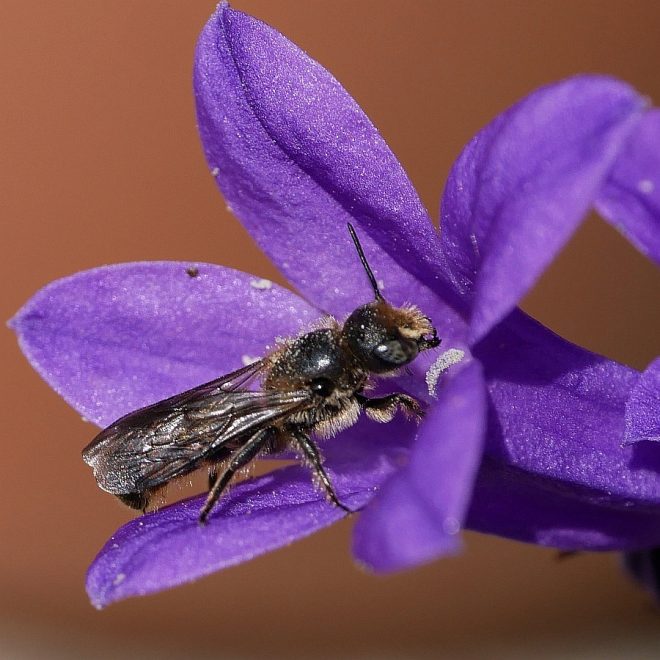 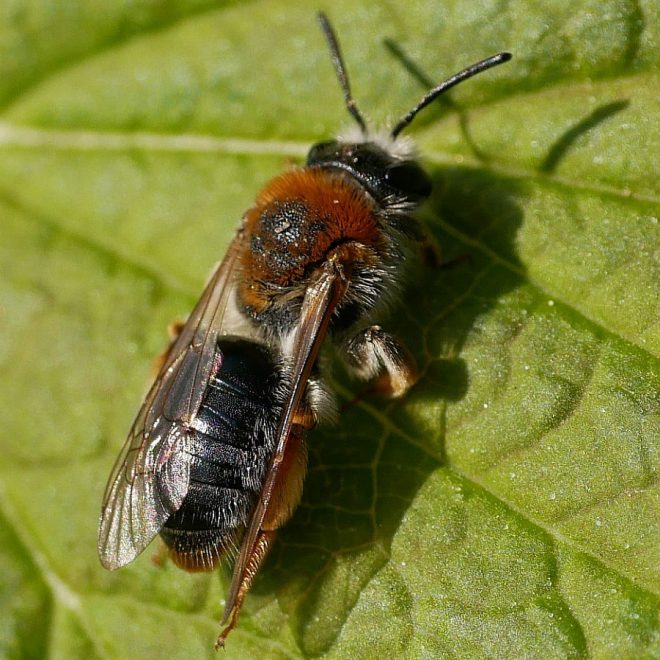 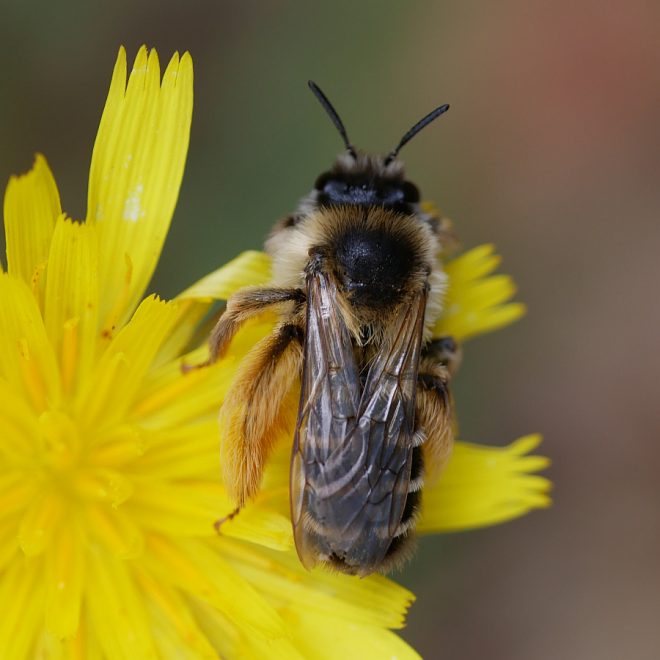 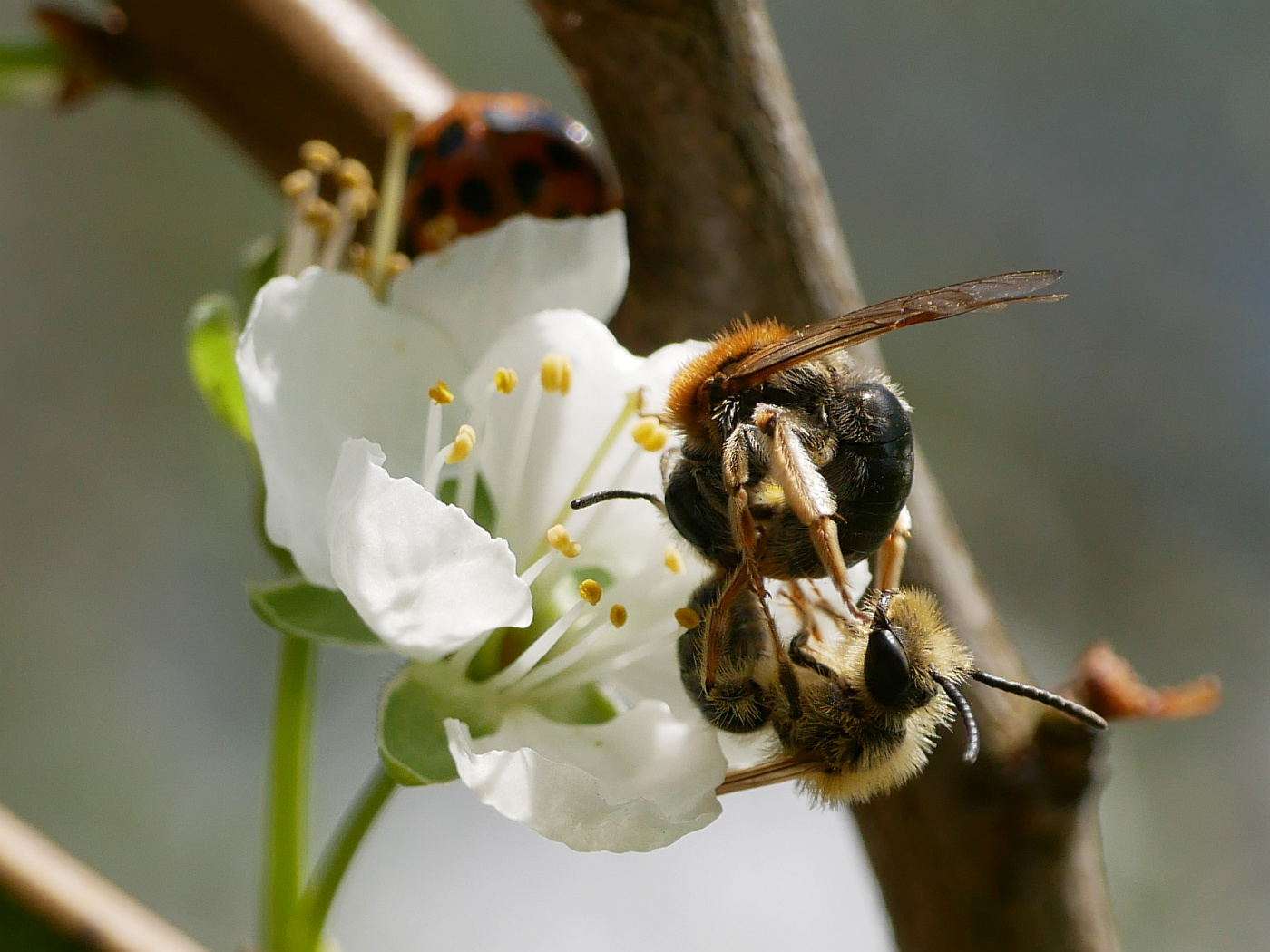 Most bee species produce only one generation each year and survive the winter mostly as a pre-pupa, which is also known as a resting larva. But some species e.g. of the genus Andrena even produce two generations in one year, a spring and a summer generation. The entire life cycle is completed within a year.

In the beginning the wild bees like the mason bee are starting to look for a suitable cavity to nest which also can be a classic bee hotel. They prepare the new home for their offspring by carrying pollen on their legs or below their abdomen to the nest. When she finished preparing the nest, the mother bee starts to crawl backwards into the brood tube. This is when she lays the eggs on the pollen stores. Each breeding chamber contains just one egg and is separated by a small wall made out of building material like clay. Finally, she closes the exit to protect the nest from predators/parasites.

A few days after the eggs have been laid, 20-40 small larvae hatch. They grow in 2 to 4 weeks over several stages to the pupa. During this time, they eat the pollen stores that the mother has laid down for them. They also survive the winter as a pupa by spinning themselves in a silk cocoon. Protected by the cocoon, the transformation into an adult bee can now begin (metamorphosis). The males have a faster metamorphosis and hatch earlier than the females. Since the bees cannot “overtake” each other within the same brood tube, the mother always puts the females in the chambers in the back first and the males in the chambers in the front, so the males can hatch earlier. After hatching next year, a new life cycle begins. 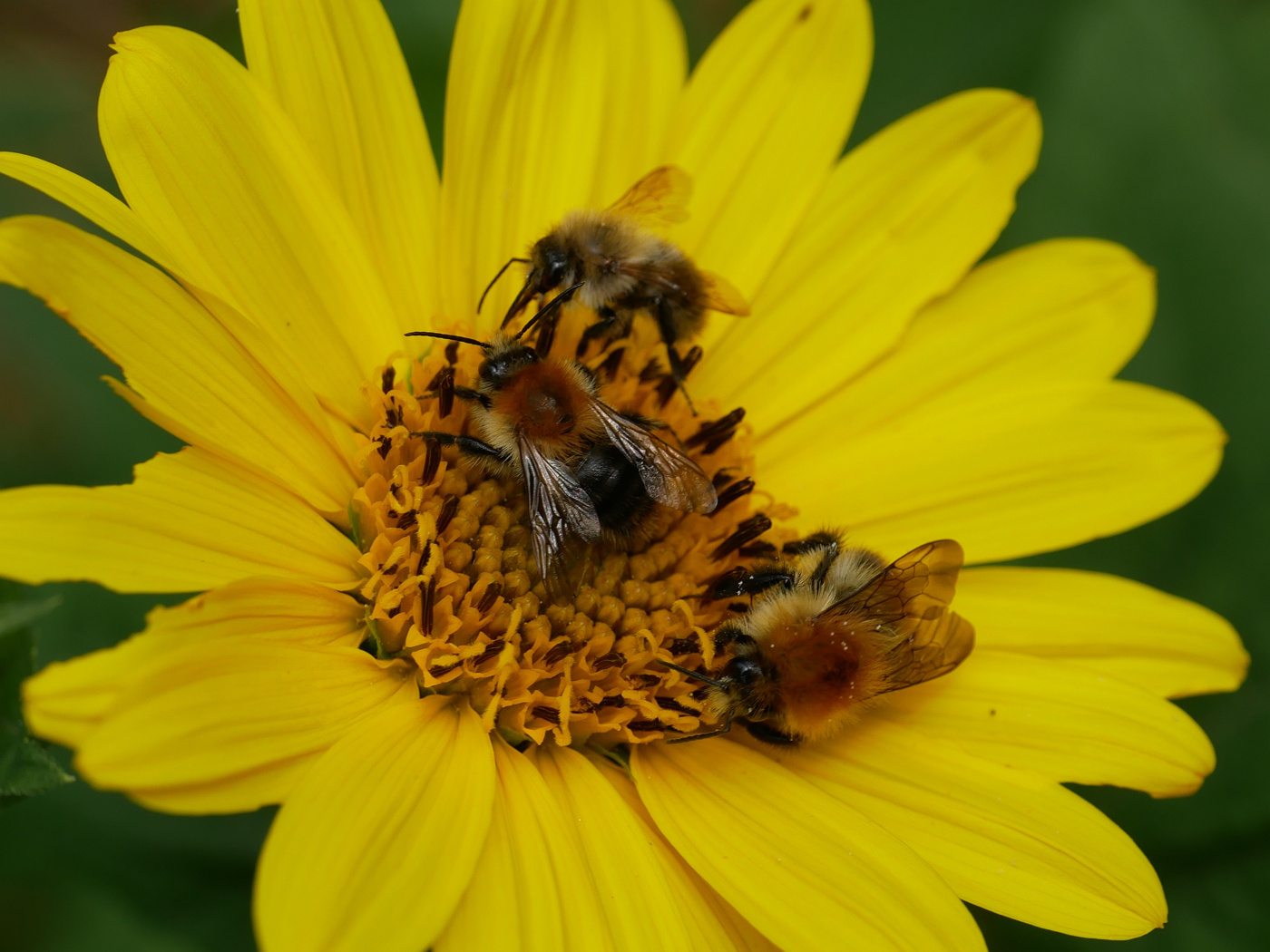 Most of the wild bee species live solitary but there are also species like the Sweat bees, which live in communities. Bumblebees are closely related to honeybees and form their colonies like them. Nevertheless, there is one big difference in the way of living between both. Whereas the honeybee colony lives during winter, only the queen of the bumblebees hibernates. This strategy has one big benefit. They need fewer supplies than honeybees, because only one individual has to make it through the winter.

Every new life cycle of a colony starts with the queen. The queen hatches like her siblings from the mother’s egg and becomes a queen thanks to the special care of the workers. A colony always produces several queens in late summer, as their survival rates until the following spring are quite low. It is easy to distinguish a queen from the workers, because she is much bigger in size. Drones mate the queens and the queens stock up for the winter so they can spend it alone in the ground. Their natal colony dies in the fall.

From February/March the first reawakened queens can be observed. They strengthen themselves and look for a nesting place (e.g. an abandoned mouse hole). When you observe her flying around with pollen, you know that she has found a place and she is stocking up for her offspring. Little by little, workers and later drones hatch, while the queen stays in the nest and only lays eggs. In the summer, young queens hatch here, too and the cycle starts all over again. 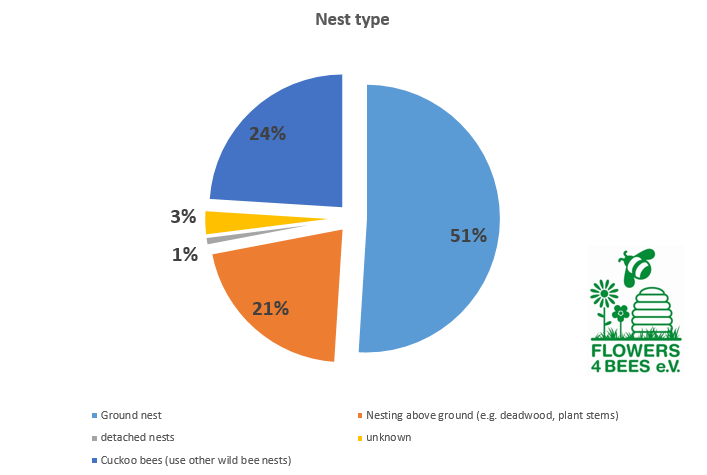 Solitary wild bees look for different places to build their nests and some are highly specialized. Depending on the species, their favorite places are:

About 75% of the wild bee species in Germany nest in the ground. Especially sunny and sparsely overgrown areas are ideal. Sand joints between stones and tiles are also accepted. They dig their tunnels more than half a meter deep!

Approximate 20% use our classic bee hotels. It is important to ensure that the workmanship is good and that the nesting tubes are sufficiently deep (at least 10x the diameter). The location should be sunny and placed in a quiet place. You can find assembly instructions here.

The main reason for the severe endangerment of many wild bee species is the destruction of their habitats and thus their nesting sites. For example, soil sealing for the construction of parking lots, roads and buildings or soil compaction and upheaval have a strong negative impact on their nesting opportunities.

With their family planning tactics, cuckoo bees are in no way inferior to the eponymous bird and use the brood care of other bees. With almost 135 species, the parasitic bees represent almost a quarter of the bee fauna in Germany. There are often close host-cuckoo relationships with a high degree of specialization. Two different groups can be distinguished, which neither build their own nests nor collect pollen stores for their offspring: the social parasites and the food parasites. 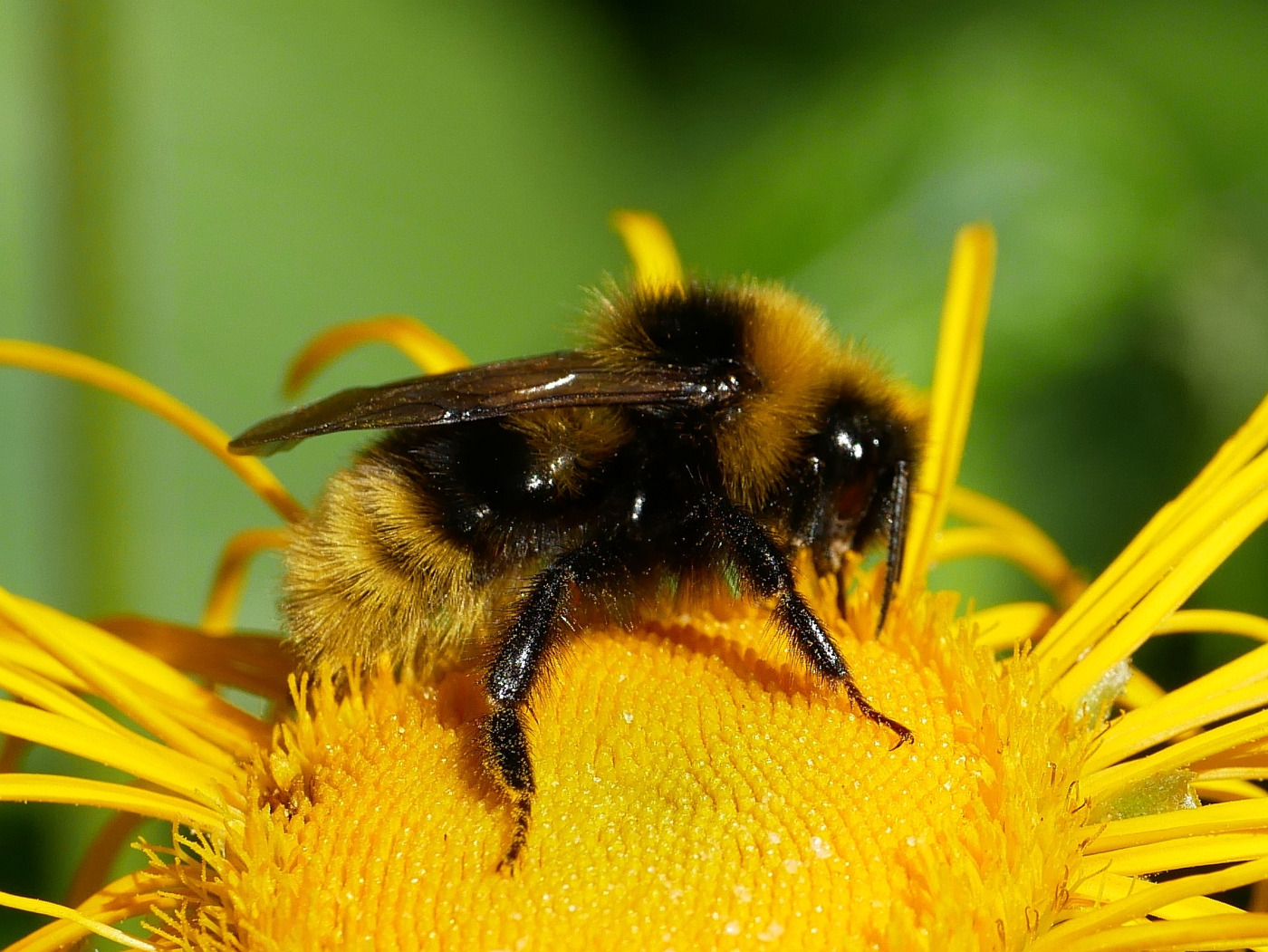 The social-parasitic bees (cuckoo bumblebees) let the workers of social bees (other bumblebee species) raise their brood. To do this, a cuckoo bumblebee queen invades an existing colony, kills the reigning queen and smuggles her own eggs into the nest. The existing workers care for these and do not seem to notice the change. Gradually, more and more offspring of the cuckoo bumblebee hatch, including queens for the coming season.

Cuckoo bumblebees can be recognized by their dark wings. Their hind tibiae have no pollen baskets, so they are not smooth but covered with matted hairs. 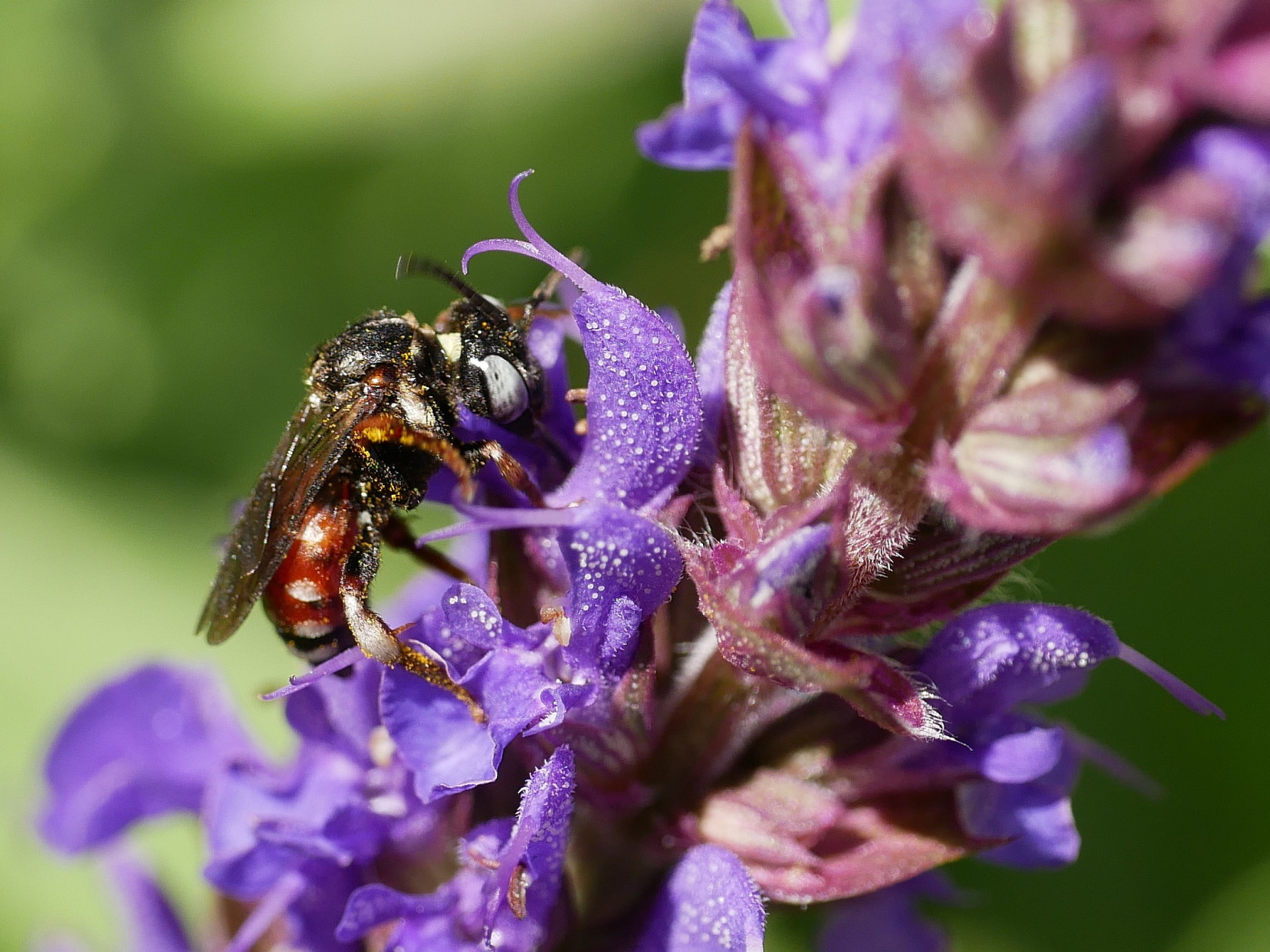 The food parasites (e.g. Nomad bees, Blood bees, Dark bees and the Epeoloides coecutiens shown here) use the food reserves of other bees’ offspring. To do this, they “smuggle” their eggs into the brood chambers of other solitary bees. They either do this unnoticed when the mother bee has flown out or they also kill the host bee that is already breeding there. The freshly hatched parasite larvae feed on the food supply of the host, which then starves to death. Since all of our native bees are vegetarians, they leave the host untouched.

On the other hand, the larvae of parasitic solitary wasps would also use the host egg/larva as a source of protein in addition to the pollen. 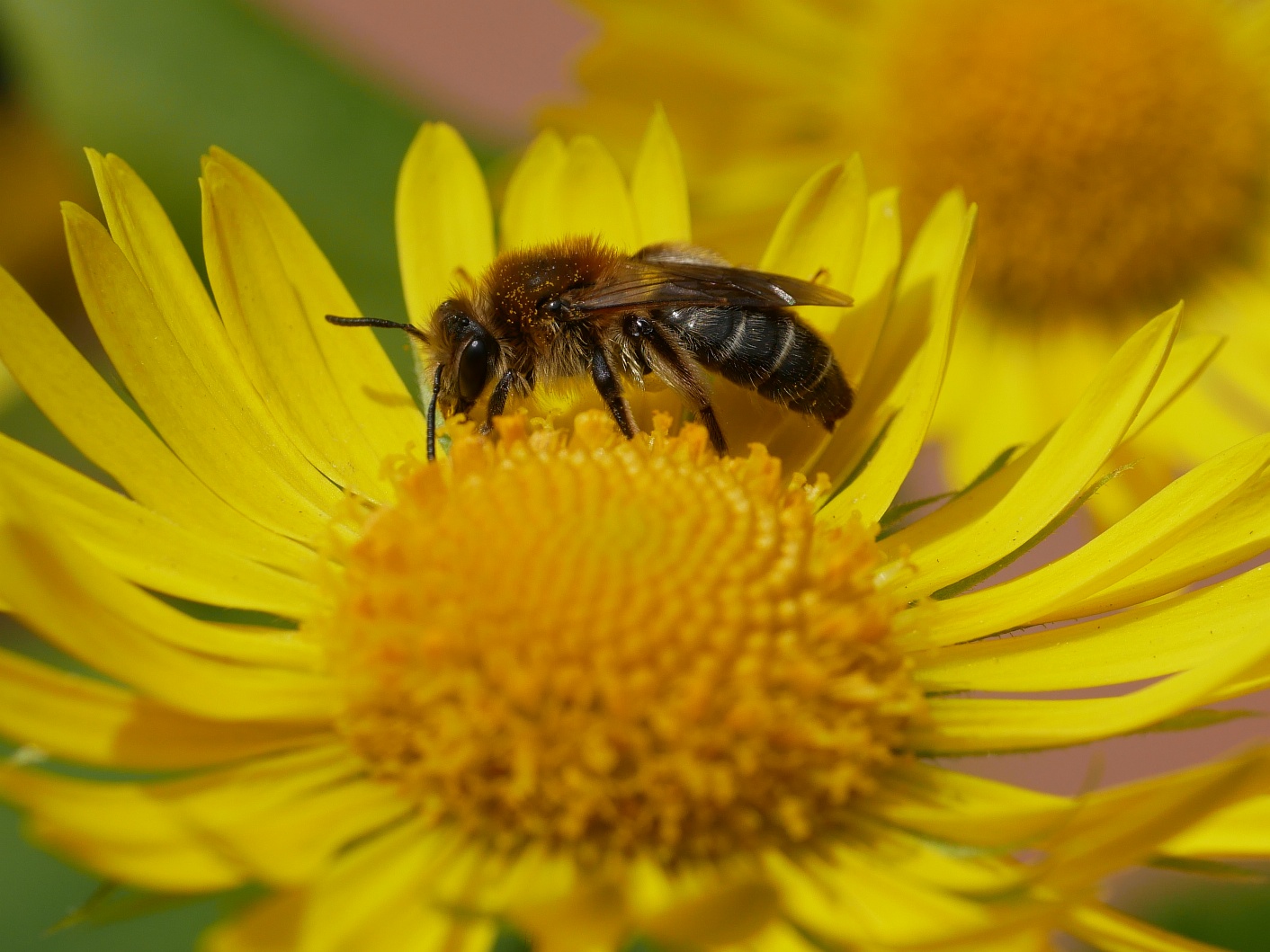 Like all bees and wasps, wild bees use flower nectar as a source of energy, e.g. to fly. Our native bee species are all vegetarians and collect pollen to feed their offspring because it contains lots of protein.

When searching for food, wild bees are sometimes much more selective than honeybees. The survival of some species even depends on the pollen of certain plant species. That is why it helps to ensure a diverse flora in the home garden or on the balcony. These general tips can help the important insects: 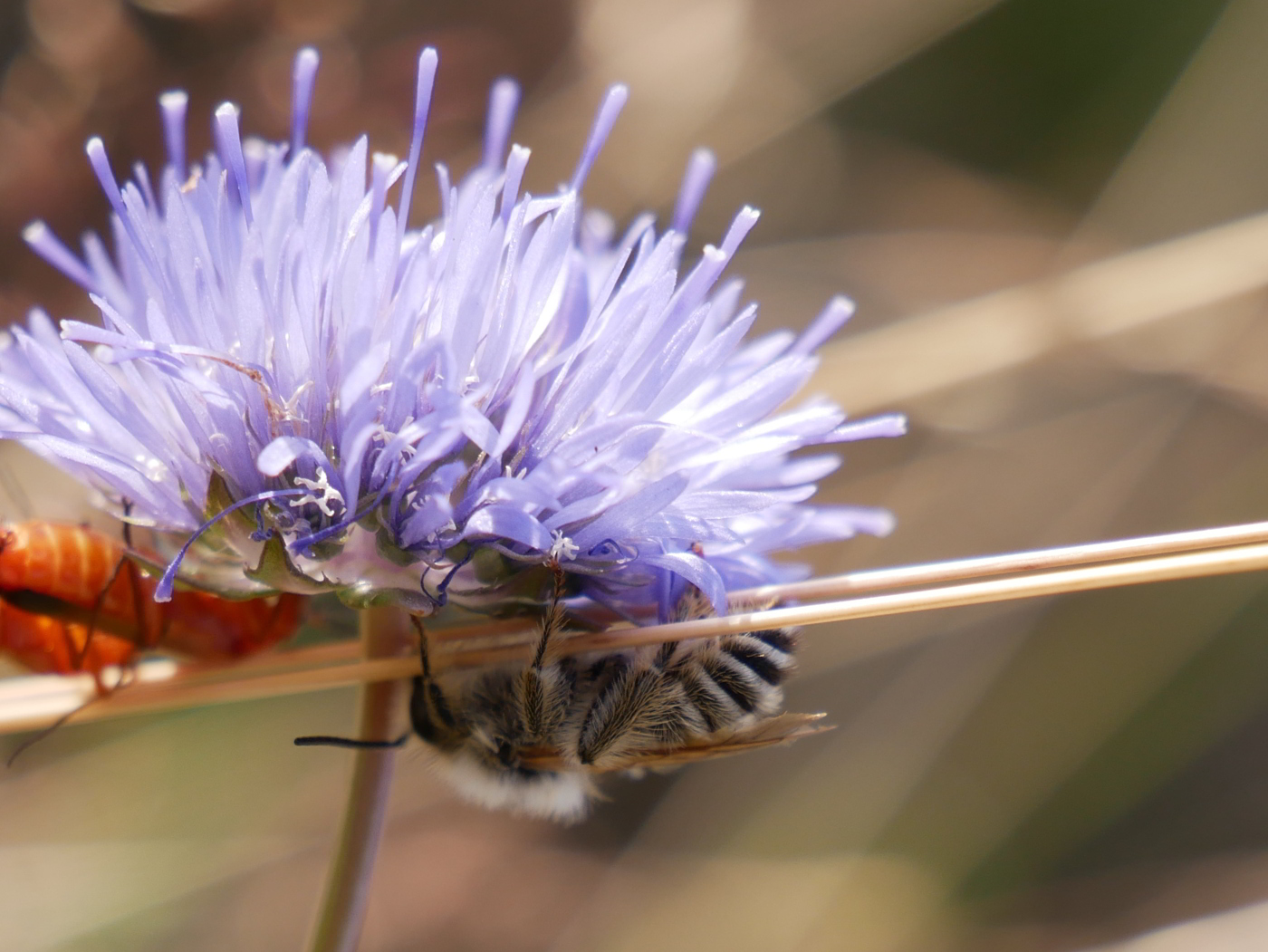 Most wild bees are inactive at night, in bad weather or in the midday hours on hot days. They rest in their nests, flowers and cavities. Some us their mandibles (mouthparts) to cling themselves to a stem and hang horizontally or vertically to sleep.

Especially cuckoo bees like Sharp-tailed bees, Nomad bees or Epeolus can be found bitten on various parts of plants. They usually sit individually on stalks, whereas e.g. Sweat bees (males) like to gather in larger groups and rest together on parts of the plant.