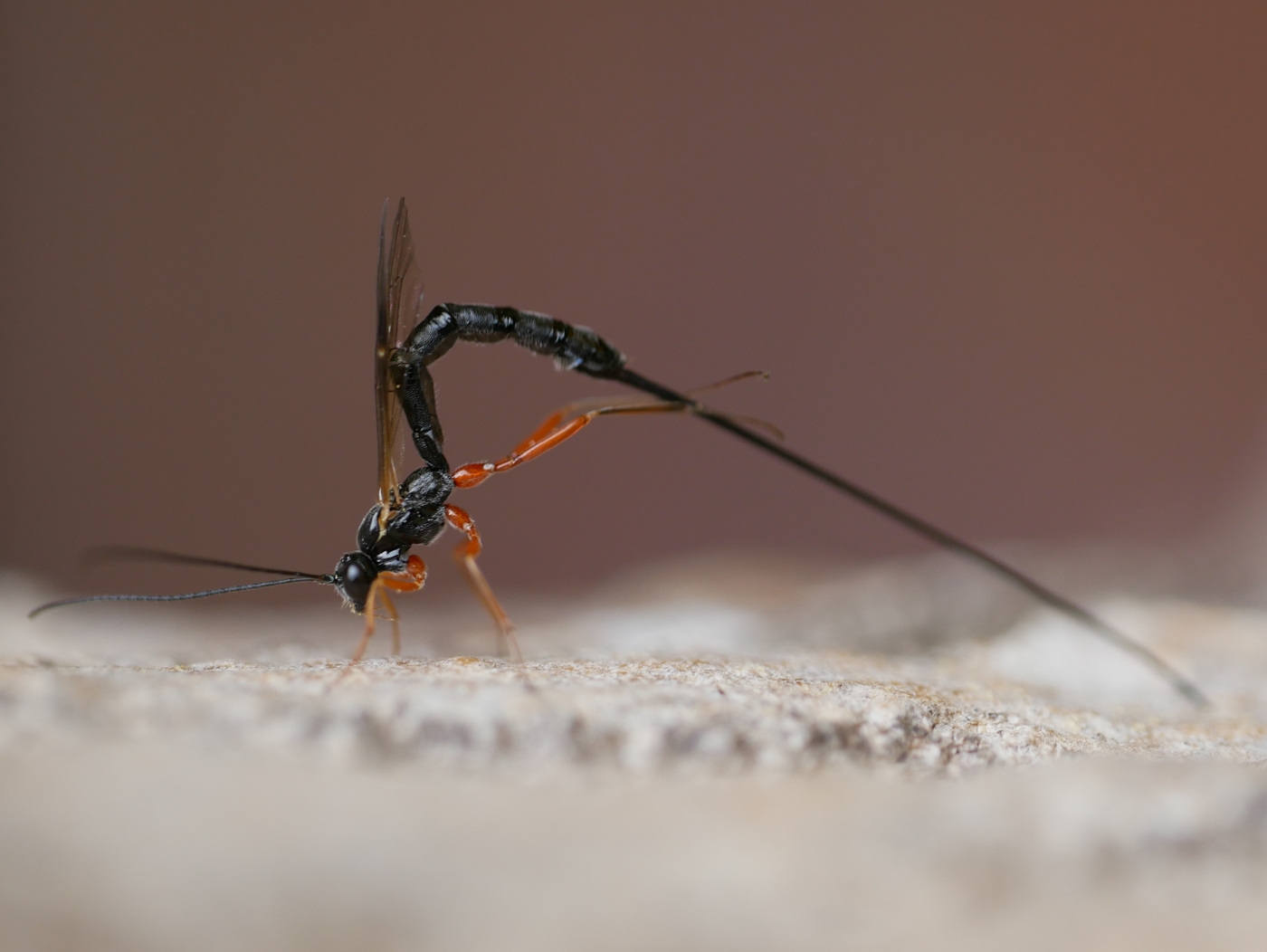 The name “wasp” is a colloquial collective term for a group of insects that belong to the hymenoptera and form one of the four “megadiverse” insect orders besides the beetles, butterflies and dipterans. Under this order, the wasps are divided into two other major suborders – the sawflies and the Apocrita.

Its “wasp waist“ and the ovipositor or stinger characterize the Apocrita. All waist wasps that have a defense sting belong to the subgroup of the Aculeata. These include e.g. honeybees, bumblebees, real wasps, paper wasps, hornets and ants. All wasps without a stinger belong to the Parasitica subgroup. In contrast to the stinging insects, the Parasitica are not social and usually have a parasitoid way of life.

More than 8,000 wasp species are currently known in Germany.

In Germany, the group Vespidae includes 17 social wasp with four cuckoo wasp species. They belong exclusively to Vespidae and are divided into the subfamilies Vespinae and Polistinae.

The Vespinae family is comprised of the genera Vespa, Dolichovespula and Vespula:

The maximum colony size of the hornet is only a few hundred individuals. A distinctive feature of this species is its nocturnal activity. Similar to mosquitoes or moths, the animals still fly out in complete darkness. Hornets are passive and shy animals, which eat mainly insects and especially wasps. Their colonies are active until approximately mid-October.

The long-headed wasps can quickly create quite powerful colonies, which unfortunately can collapse just as quickly as they were created. Their nests are often dead by mid-August. For example, the gray nests of the Saxon wasp (Dolichovespula saxonica), which look “coiled”, are often found in attics or sheds. The only species building its nests hanging freely in bushes or on buildings is the Median wasp (Dolichovespula media). The conically shaped nests of these wasp species reach a maximum diameter of 20 centimeters. In addition, long-headed wasps do not eat sweets or grilled meat and rarely cause conflict.

The short-headed German wasp (Vespula germanica) and the Common wasp (Vespula vulgaris) can create very large colonies with up to 10,000 individuals. Some colonies can last even until November when they are in a warm place (e.g. indoors). Both species are really into food, which contains sugar and meat, especially in August and September. Furthermore, both species are also called “earth wasps” because they like to build their nests in the ground. The ground nests are mostly just noticeable because of the air traffic at the entrance hole.

It is important to distinguish between these three groups because they differ significantly in their way of life. However, all groups have in common that they form summer states. The genera short-headed and long-headed wasps contain several wasp species.

Another genus is the “paper wasp” that includes four species, which can be found in Germany

Paper wasps (Polistinae) are quite similar to common wasps in their appearance, because the Central European species also have the yellow-black warning coloration and long hanging legs. However, they differ in their nest building technique. The combs and colonies are significantly smaller than those of the common wasps, which are more common and better known to the public.IR

Paper wasps are extremely peaceful and tend to be shy towards humans. They are good insect hunters, catching large numbers of flies and caterpillars for their offspring. They are not choosy, so they can survive in different habitats like dry grassland or residential areas.

A helpful identification key for the wasps can be found here. (this key is only for German species)

Some of the most recognized colony-forming wasps are the German wasp, the European hornet and the European paper wasp.

Every wasp colony consists of a queen and many workers. The brood hatches in August and contains of sexually mature females and males. The males hatch from unfertilized eggs and are called drones. The female workers live together and are organized in different divisions of labor. These divisions are feeding the larvae, cleaning the cells, obtaining food and taking care of the queen. 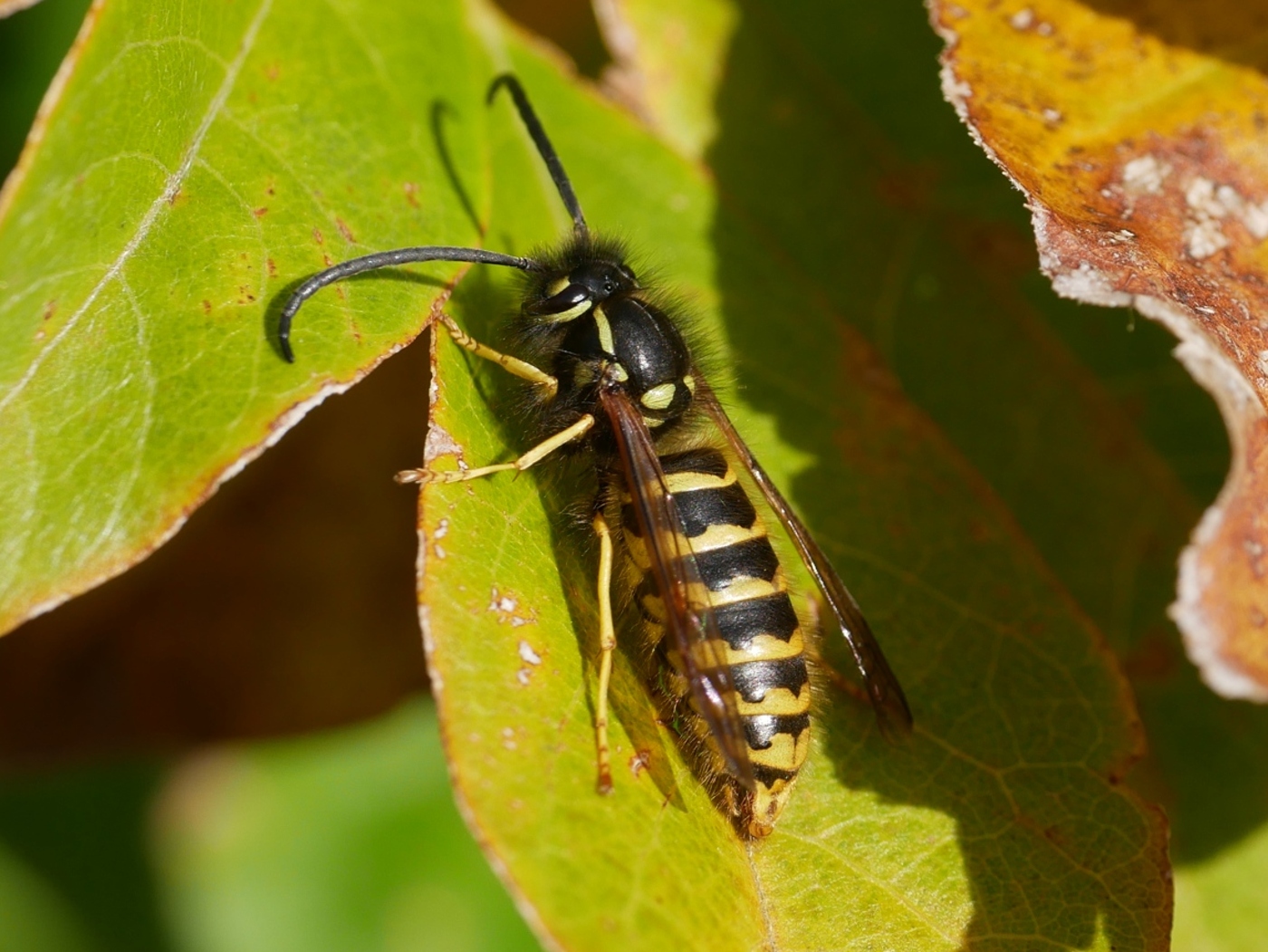 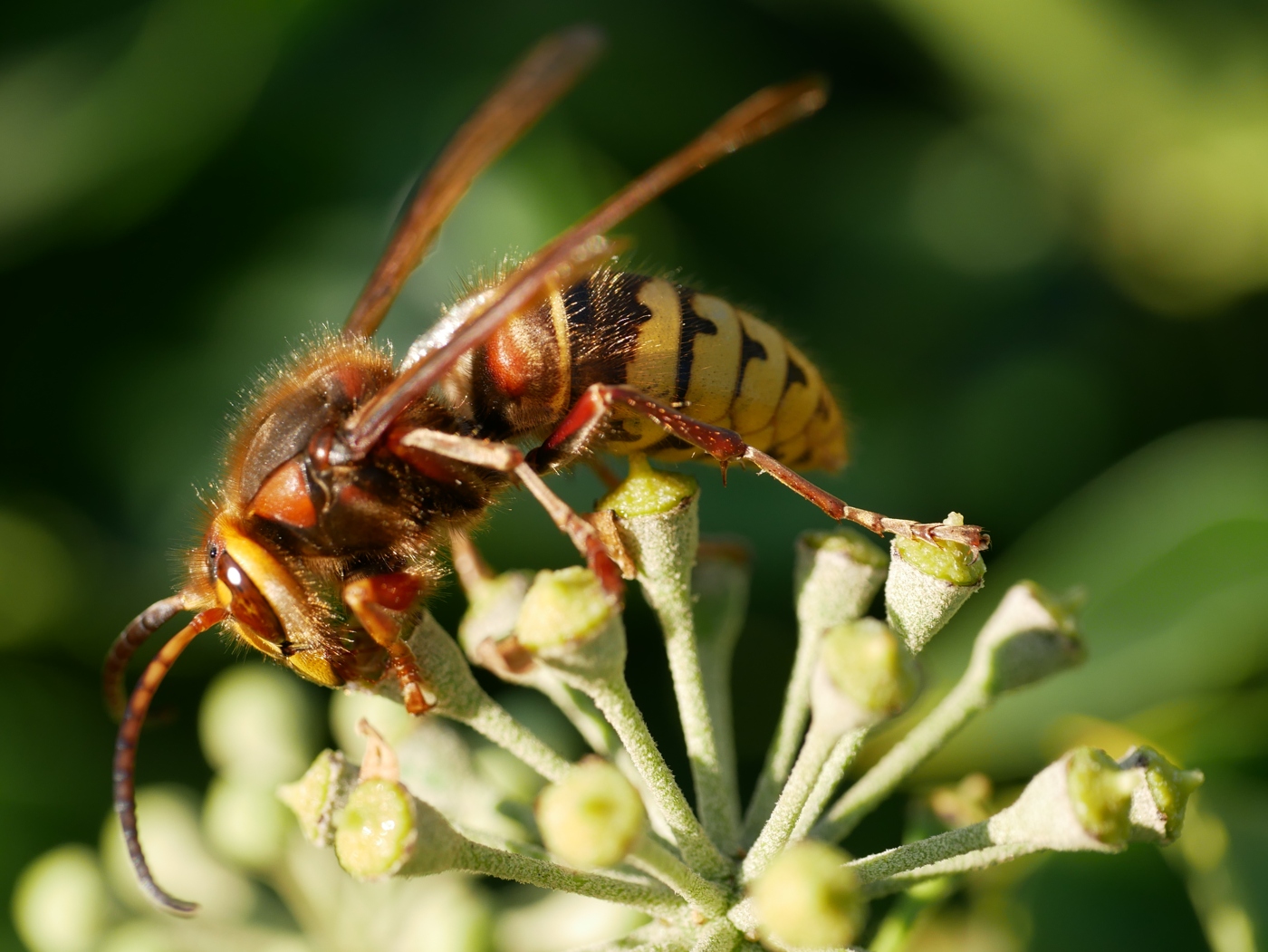 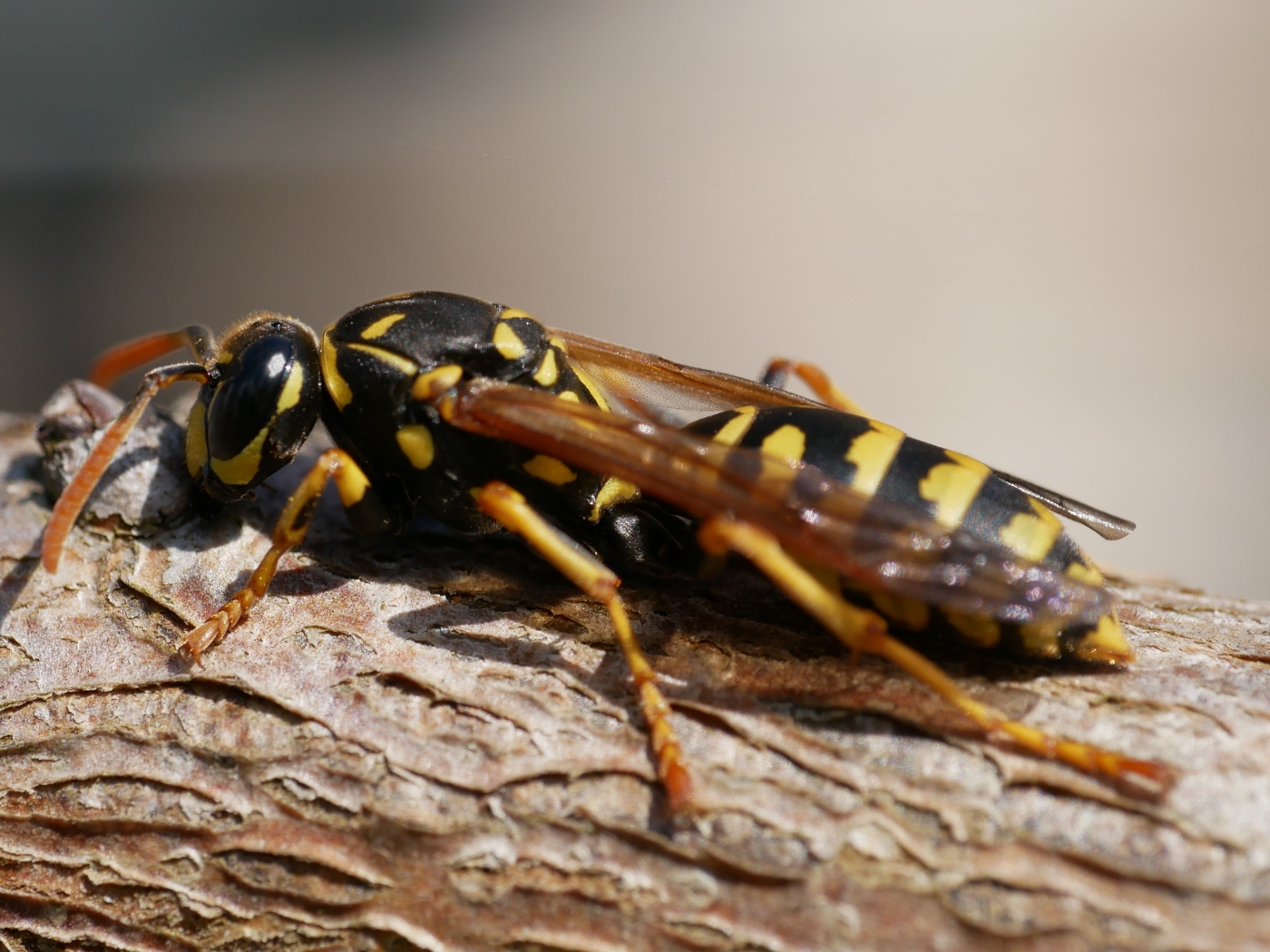 The life of social wasps are divided into 6 phases. In the following the general life cycle of several species is decribed:

From October to March, the fertilized queen spends her time in a sheltered place. Here, with sufficient fat reserves, she lasts in an energy-saving cold torpor to survive the cold season. To protect herself from injury, the queen tucks her limbs closely to her body and folds her wings away. Mould, birds, mice and also humans are enemies of the queen until spring.

With longer days and rising temperatures, the queen slowly awakes from her cold torpor. This can take several days or even weeks. After the wasp queen has left her shelter, she fortifies herself with plant juices and searches over the next few days for a weatherproof location to build a colony. As soon as a suitable place has been found, the hornet queen e.g. collects wood fibers and mixes them with saliva to make a kind of paper mache. This material is now used for nest building. After the first part of the nest is build, the queen starts her brood and glues her eggs to the walls of her nest. Then she starts to build the outer shelter of the nest to protect it against extreme temperatures until spring.

In May the first larvae begin to hatch and they grow so fast, that they are already ready to spin a dense cocoon around them in June. There they remain as pupae for around two weeks.

The queen now continues to lay eggs every day, which must be cared for. For example, a Vespula germanica queen lays up to 300 eggs a day at this time. Huge amounts of insects are hunted and caught every day to feed the larvae in the wasp colony. These include mosquitoes, grasshopper larvae, caterpillars and spiders. However, the adult wasps need sweet, carbohydrate-rich food. If a worker returns to the nest with a full crop, the other workers, using their antenna trills, beg for a drop of the crop contents. However, this in turn must also be shared with the others. This process is called “trophallaxis”.

In July, they collect more building material to improve the protective cover of the nest. First, they build another outer layer and then they remove an inner layer to make more space for their cells. This is how the nest grows.

The nests of dolichovespula wasps such as the Median wasp or the Saxon wasp are already in the dying phase at this point. The sexually mature wasps fly off. The nests are already deserted by the end of July.

From August/September only wasps of the Vespula genus like the German and the Common wasp as well as the hornet are still active. In late summer, larger cells are built for the future queens and drones.

After her hard life, the queen leaves the wasp colony with tattered wings and dies as a result of weakness.

Due to the further swarming of the sexually mature animals and the resulting shortage of food, the social organization in the colony disintegrates. Mating now often takes place in the nest and some of the larvae are also eaten.

The fertilized females are leaving as well and look for a suitable hiding place for surviving the winter. The workers are slowly dying off when nighttime temperatures drop.

This is how the life cycle of the wasps end and now the fertilized females are waiting to start this cycle again next year.

Most of the solitary bee and wasp species that lead a hermit life are hardly known. Nevertheless, there are several thousand solitary wasp species worldwide. This includes, for example, the Potter wasp (Ancistrocerus nigricornis), the Asian mud-dauber wasp (Sceliphron curvatum) and the European beewolf (Philanthus triangulum).

Solitary wasps are living alone and not in a colony. Only in the mating season, they have contact to other conspecifics. 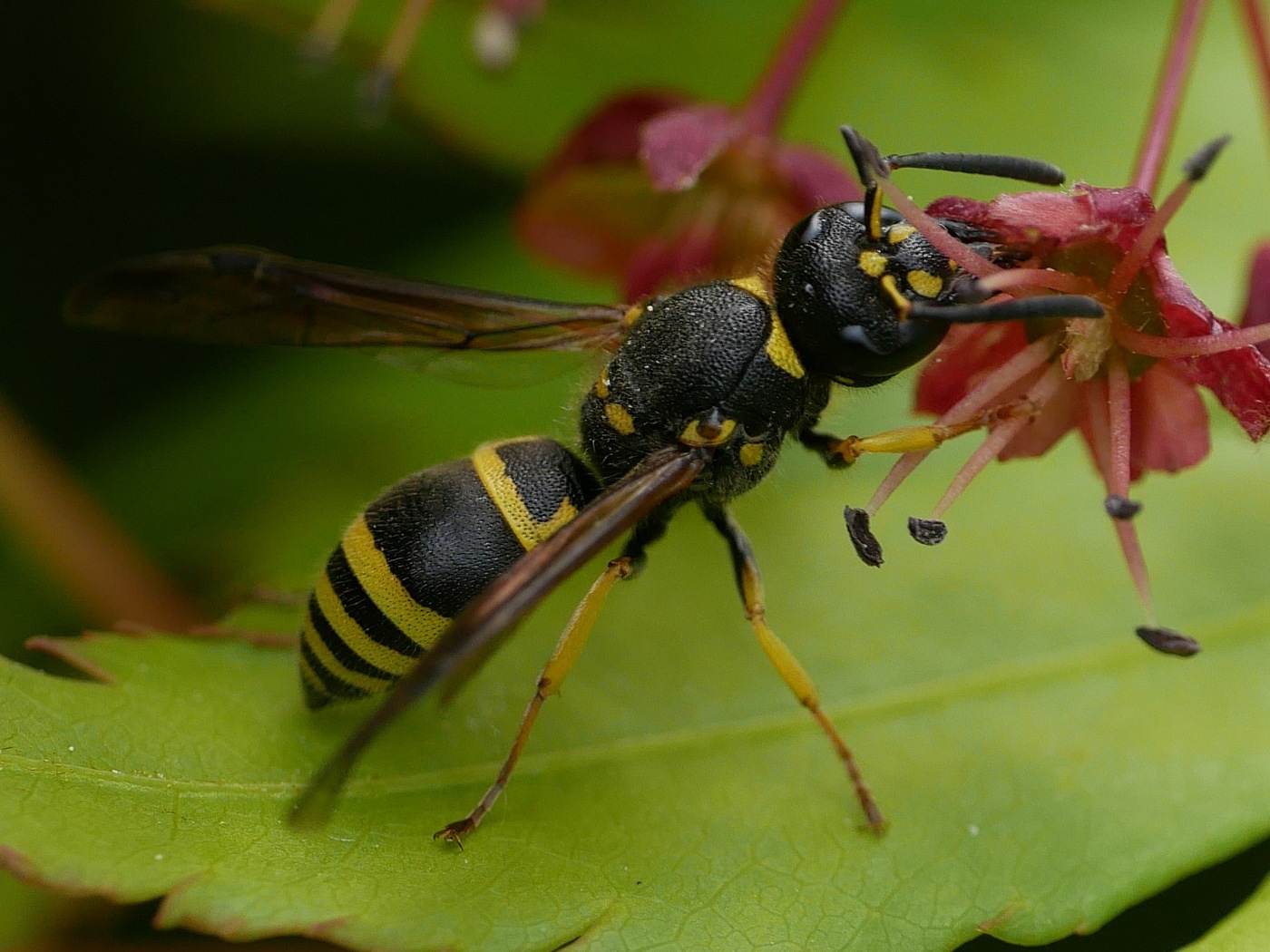 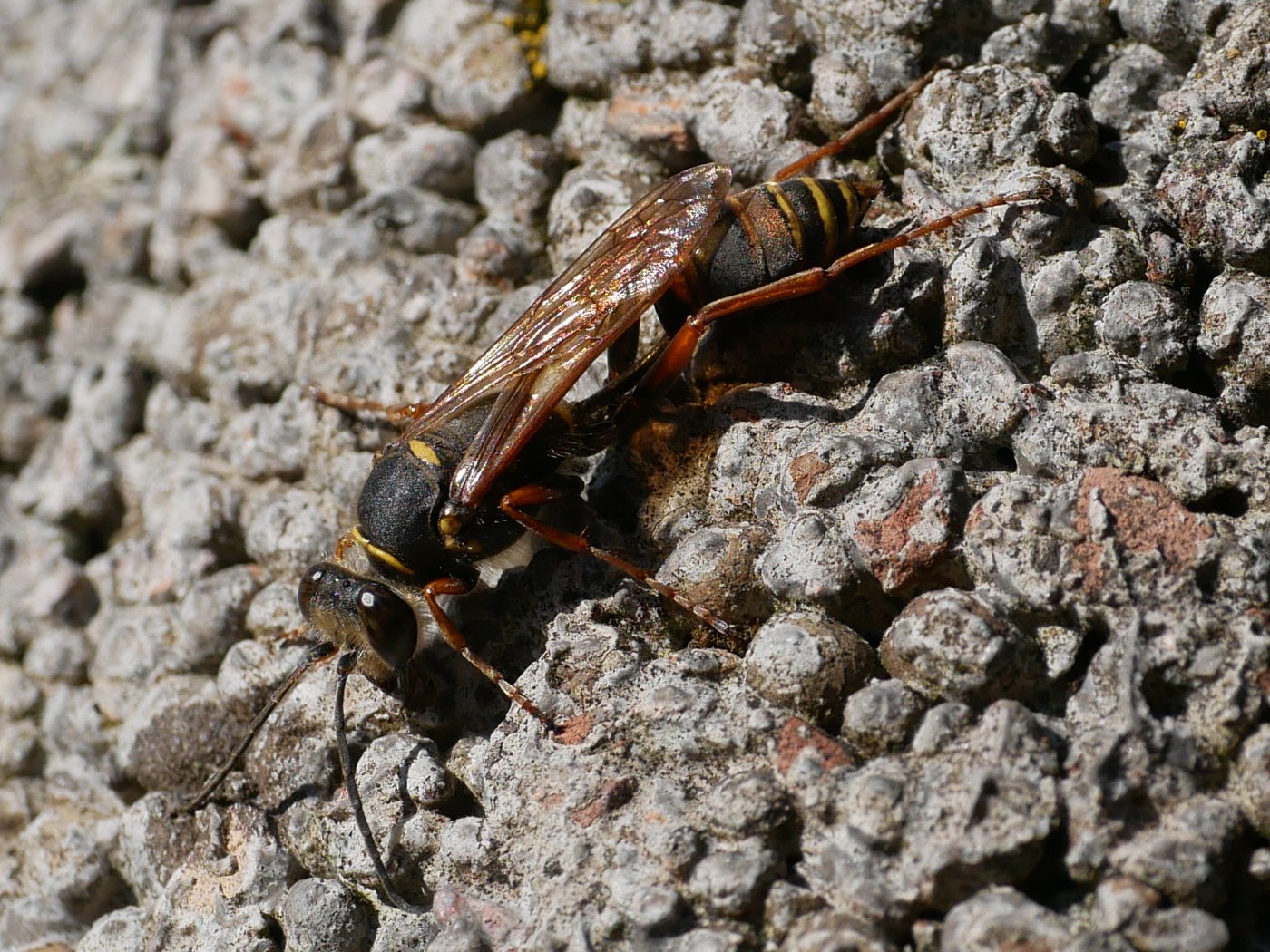 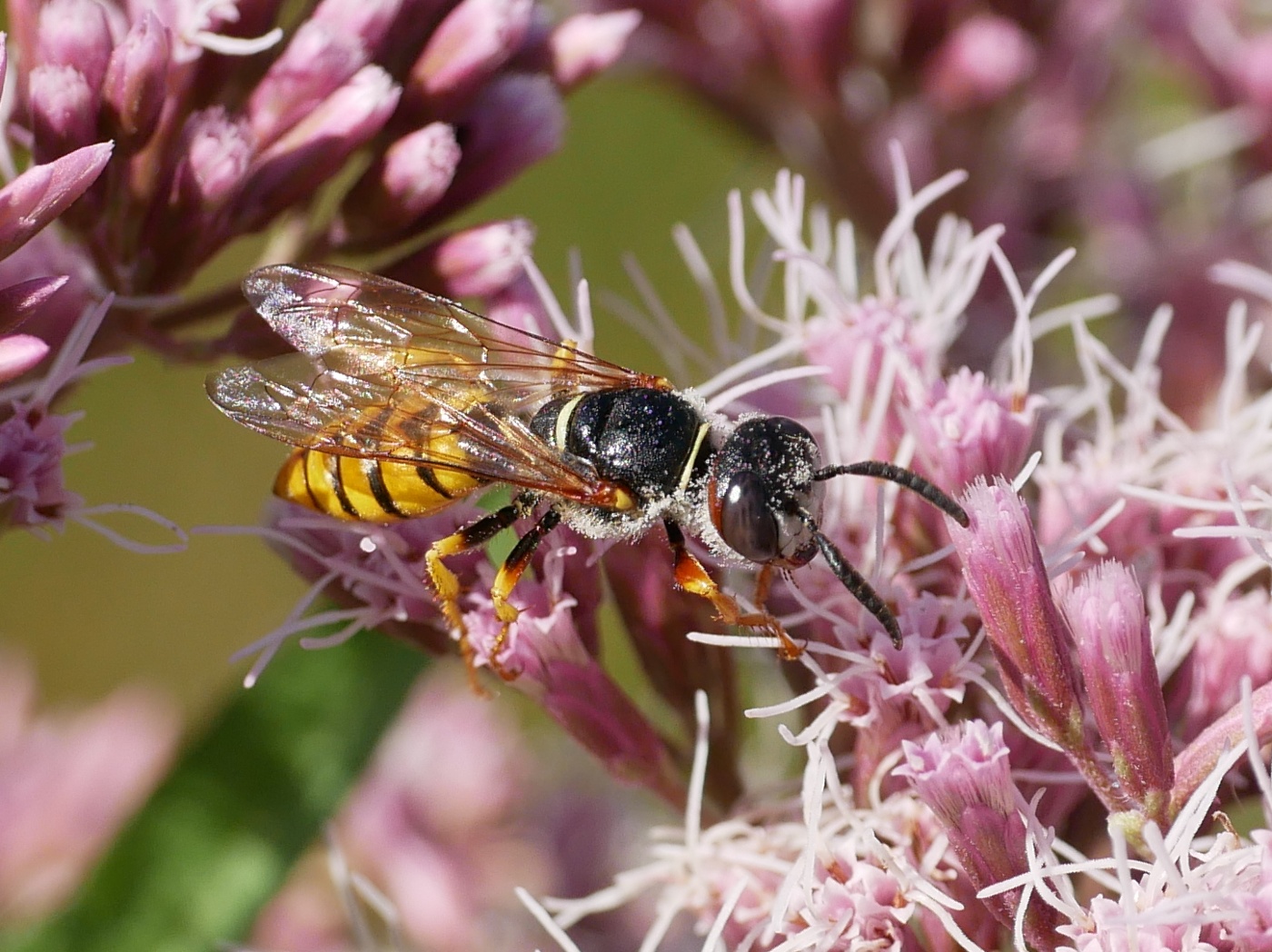 These wasps are parasitic and do not build their own nests. Instead, they lay their eggs in the nest of a suitable host species.

The gallery below shows the European beewolf at the entry of her subterranean nest. This tubular nest can be up to a meter long. After she catches honeybees, she paralyzes them with her poison stinger and brings them to the nest where they serve as food for the offspring when they hatch.

One of the most colourful subgroup of the cuckoo wasps are the so-called ruby tailed or jewel wasps. The species Hedychrum rutilans is shown as an example below. She is called a “food parasite” because she smuggles her egg into the European beewolf’s brood cell. There the larva hatches and starts to eat the host egg and lives as a parasitic larva on the food supplies until pupation. 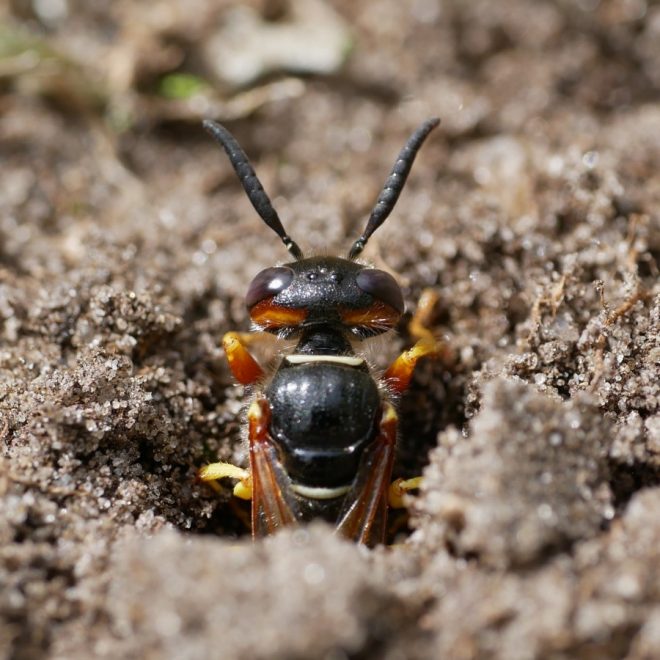 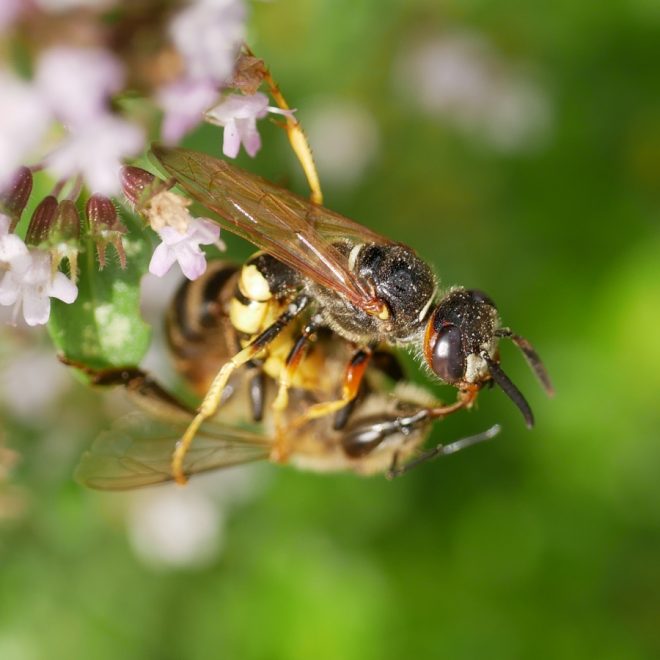 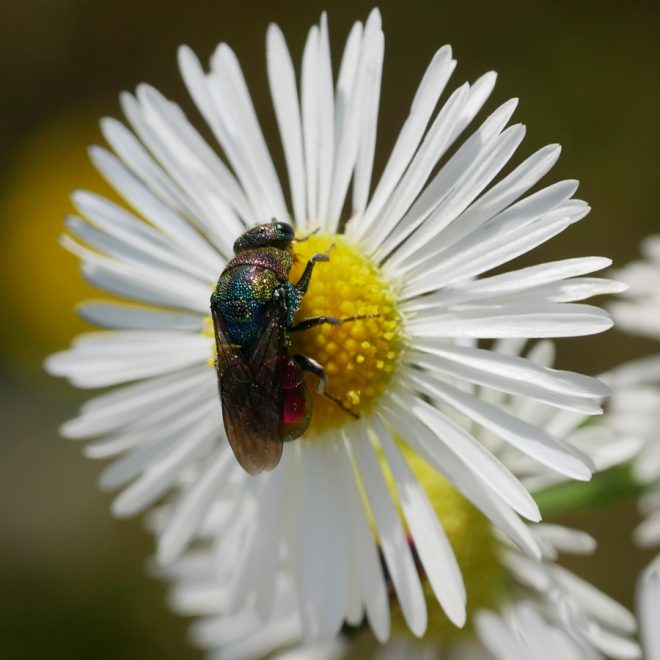 Only two of the more than a thousand species of wasps fly to us to get sweets. These are the German wasp and the Common wasp. They seem annoying and are responsible for the bad reputation that all wasps have. 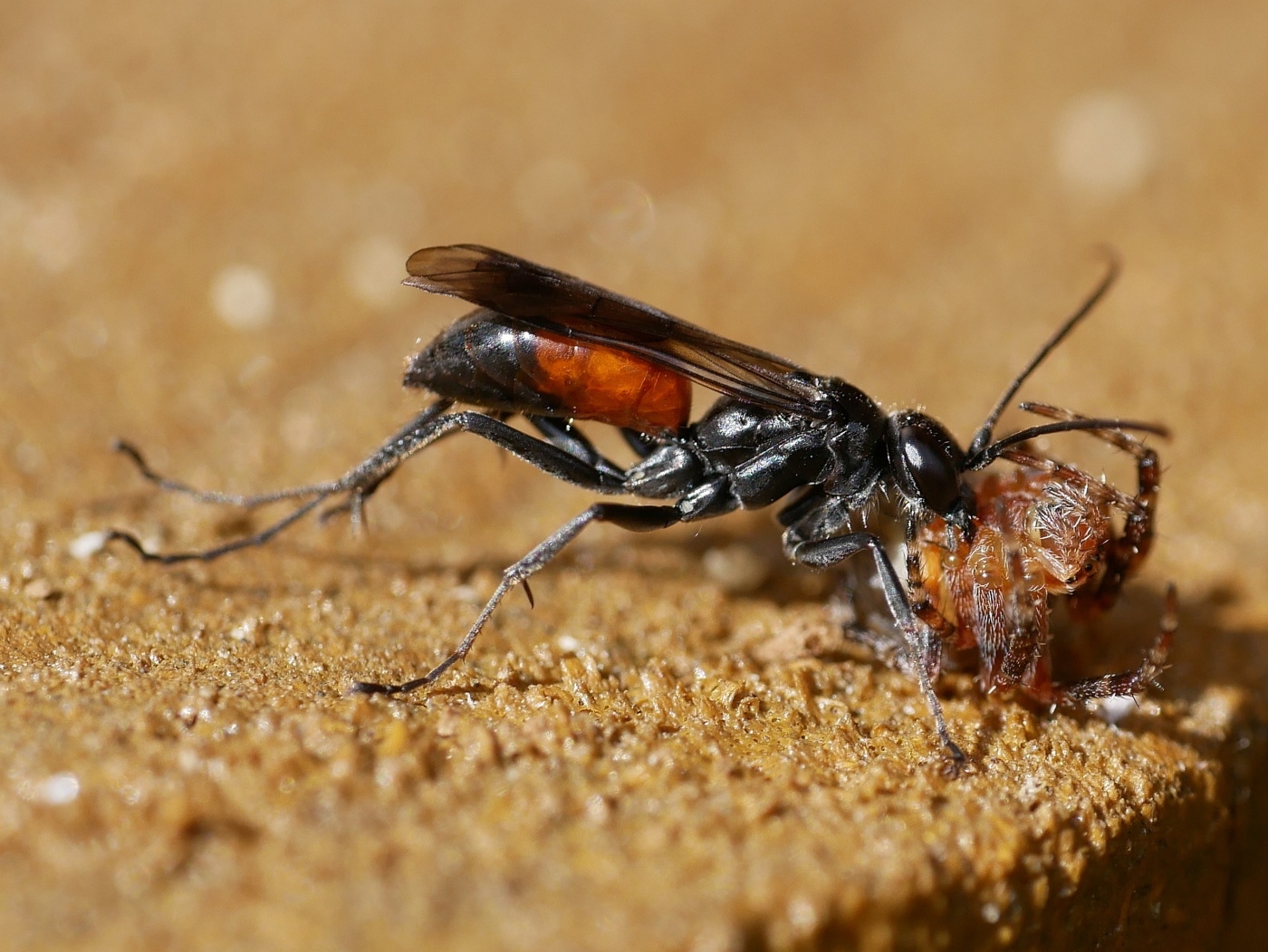 Why are wasps useful?

Since wasps, like bees, belong to the hymenoptera, they play an important role in the ecosystem. Therefore, their protection is important as well.

Most wasp species feed on plant sap and fruit, but are also carnivores and hunt other insects for their brood. A small wasp colony consumes up to 3,000 flies, mosquitoes, caterpillars, moths, spiders and other small animals per day. In this way, the wasps regulate a large number of pests in a natural way from which our agriculture and hobby gardeners can benefit.

But that’s not all. They are also responsible for pollination because they are collecting nectar, too. 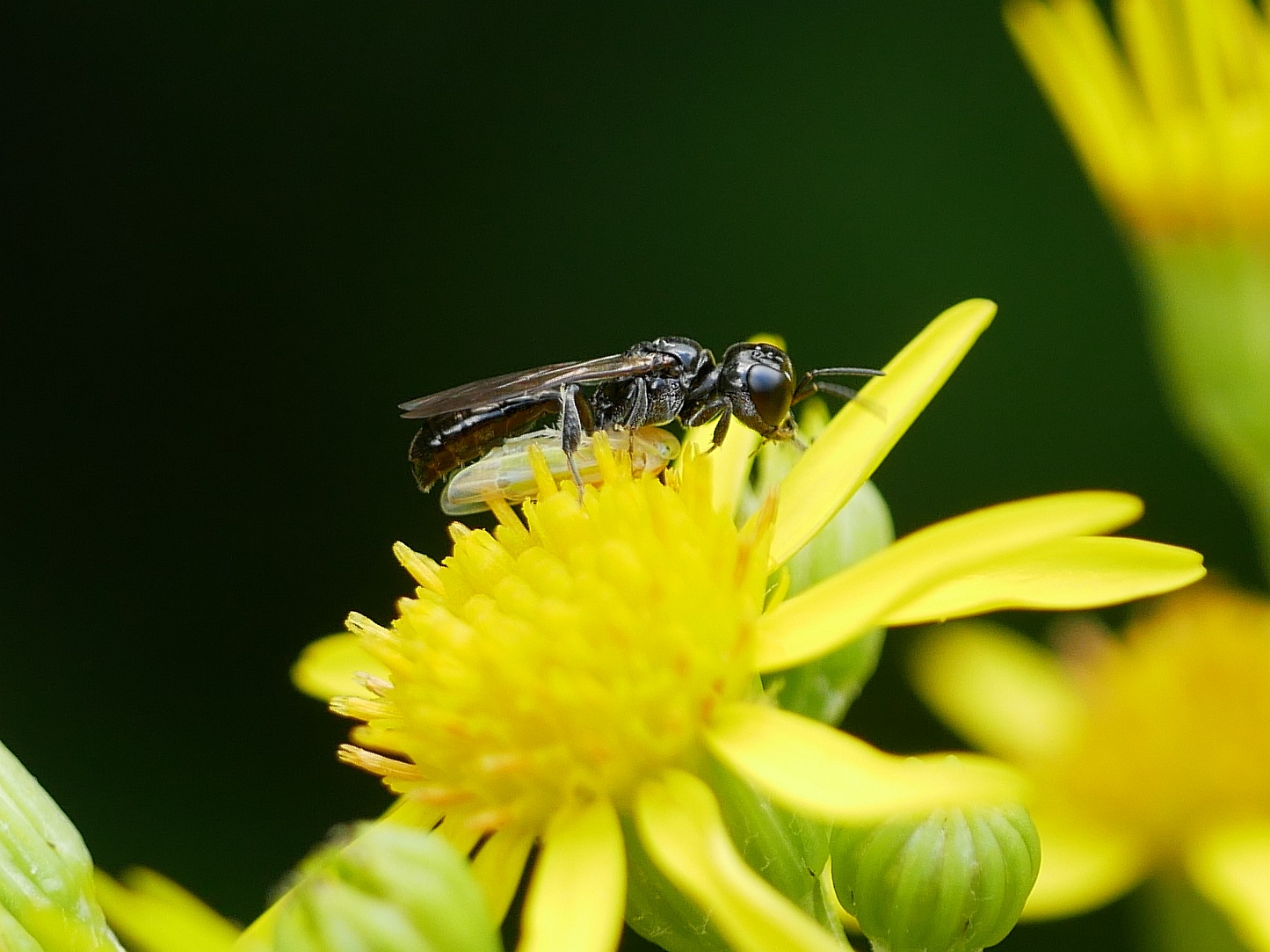 How to identify a wasp?

To identify a wasp, it is helpful to capture her in a clear container and examine her with a magnifying glass. An identification key (this key is only for German species) can be used to identify the correct wasp species. In many cases it will not be an uninvited guest at the coffee table but instead a useful insect hunter.

What to do if a wasp nest is discovered?

According to the Federal Nature Conservation Act in Germany, it is not allowed to kill or disturb wasps without a good reason. The commercially available wasp sprays or traps may be sold legally, but not being permitted to use. Furthermore, the unauthorized removal of the nests is also forbidden. Anyone who discovers a wasp nest in the garden or on the house should first contact the city administration or the responsible nature conservation authority. Often there are wasp advisers who can professionally relocate nests. Fines can be imposed on persons who kill wasps.