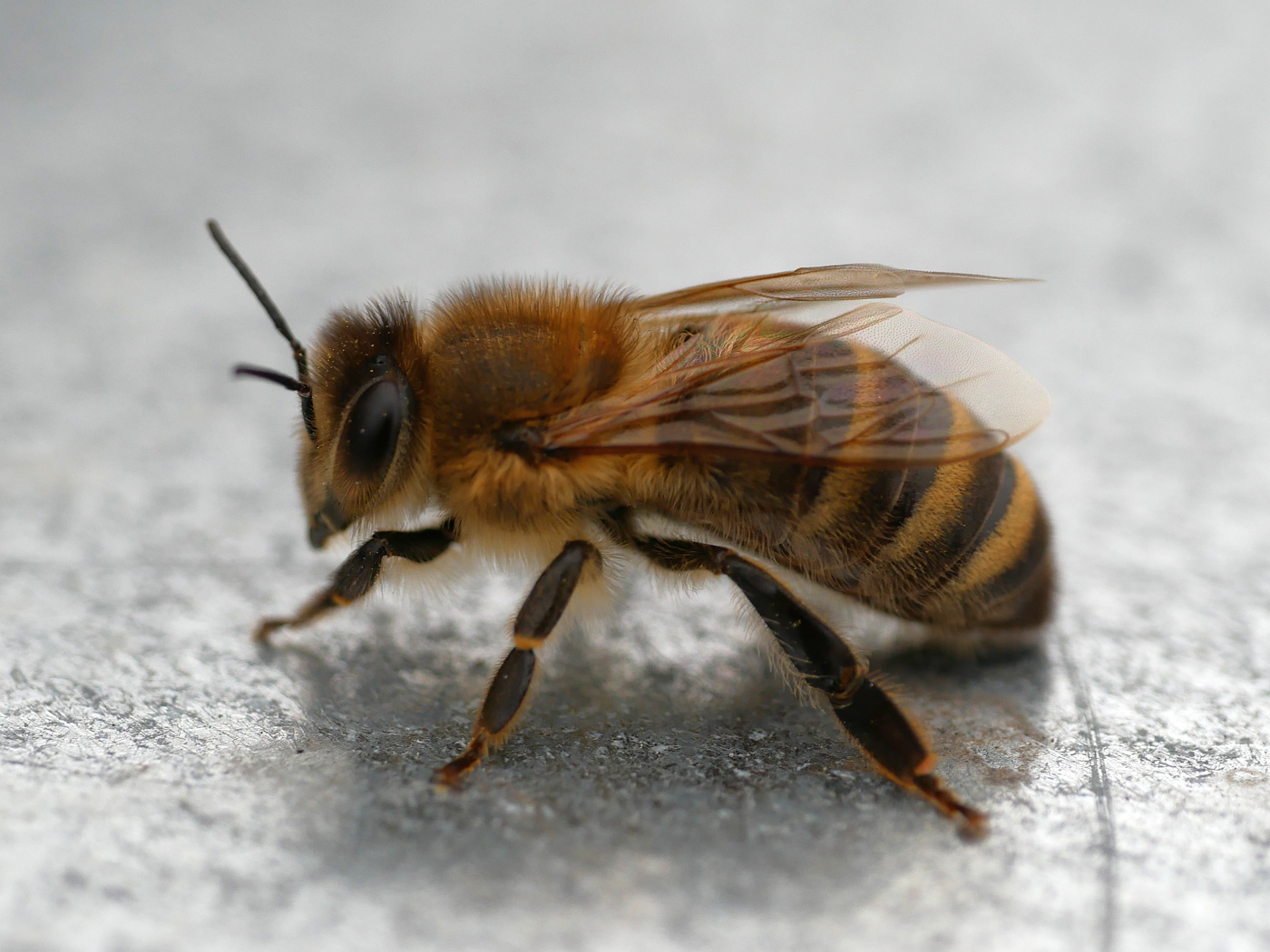 There are nine species of honeybees worldwide. The western honeybee, which is widespread in Germany, is considered as the best honey-supplier all over the world. The other eight species are native to Asia, where especially the eastern honeybee is still used by humans for honey production.

All honeybee species differ not only in appearance and size, but also in their lifestyle – today we take a closer look at the western honeybee.

The western honeybee (Apis mellifera) is native to our latitudes. Originally native to Europe, Africa and the Middle East, they spread worldwide during the European colonization and are considered as one of the most important farm animals in the world.

In Germany and other milder climate zones in Europe, the European dark bee (Apis mellifera mellifera) was most widespread until World War II. After this, the breed Carniolan honeybee (Apis mellifera carnica) displaced her. She lives in the mountains, is very peaceful and is characterized by her high honey production. 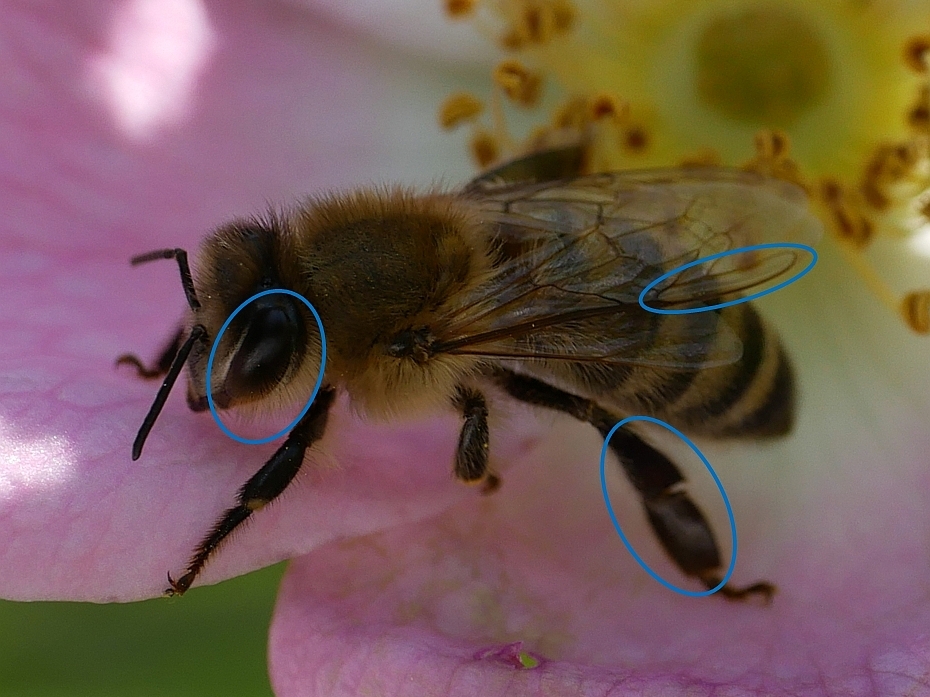 How do I recognize a honeybee?

Honeybees have three particularly clear characteristics by which they can be identified. They can be very well seen in this picture:

The size of the bee is also an important criterion: Honeybee ladies are around 12 mm long. 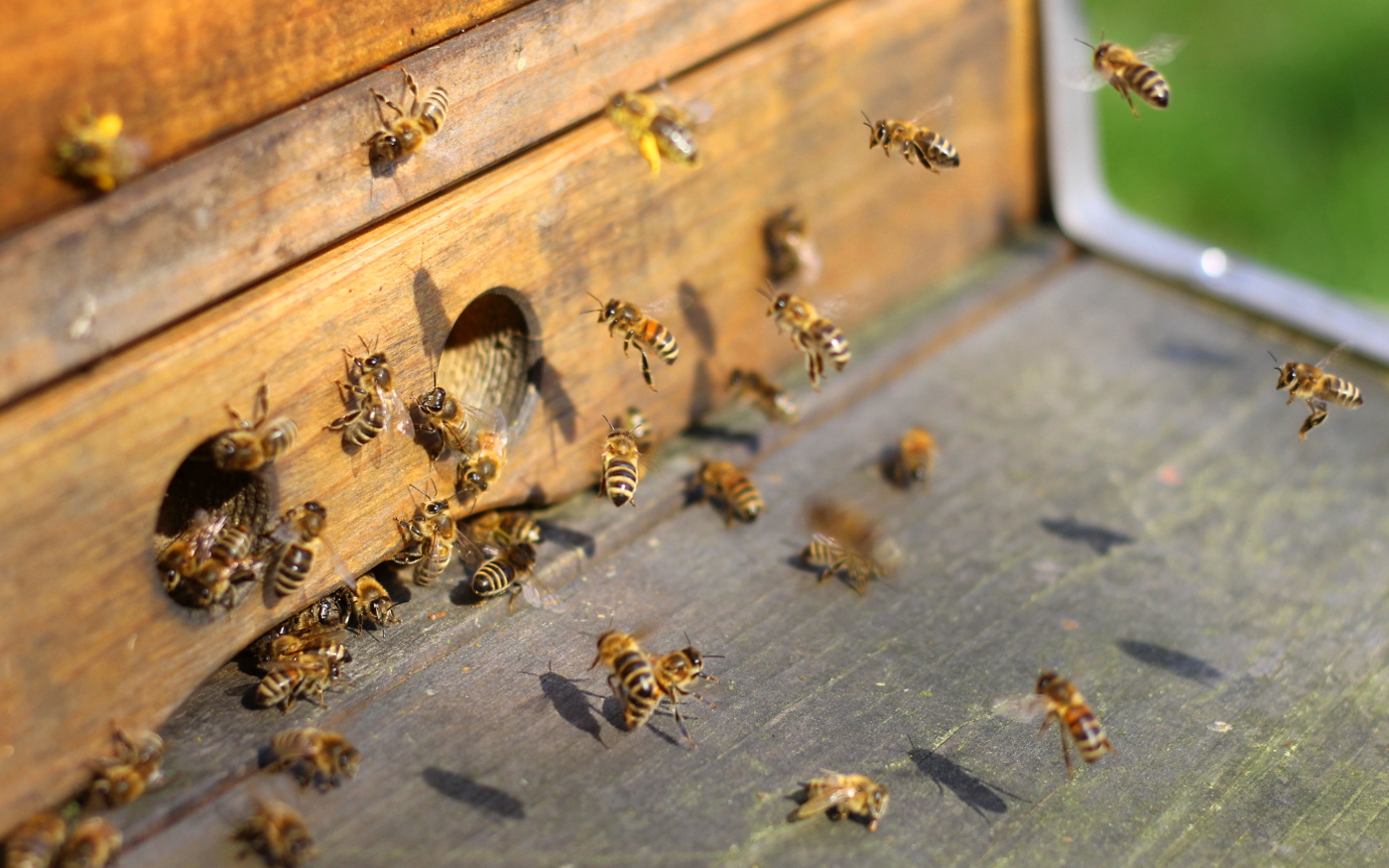 The individual bees in a colony achieve together more than a single honeybee could ever accomplish. For this reason, the colony is also referred to as superorganism.

Superorganism means collectively developing abilities or qualities beyond the abilities of the individuals in the community.

Along with ants, honeybees are one of the few animal species that have these abilities. If you think of a bee colony as a superorganism, you can better understand how the bee colony works.

A bee colony consists of 30,000-50,000 bees. Three bee types are living in the colony: the workers, the queen and the drones. Together they are like an organism whose cells separate during the day to fly out and later return to form a physical unit at night and in the winter. Just as cells perform different tasks in a body, bees also subject themselves to a highly specialized division of labor in order to ensure the survival of their colony: “One for all, all for one”. 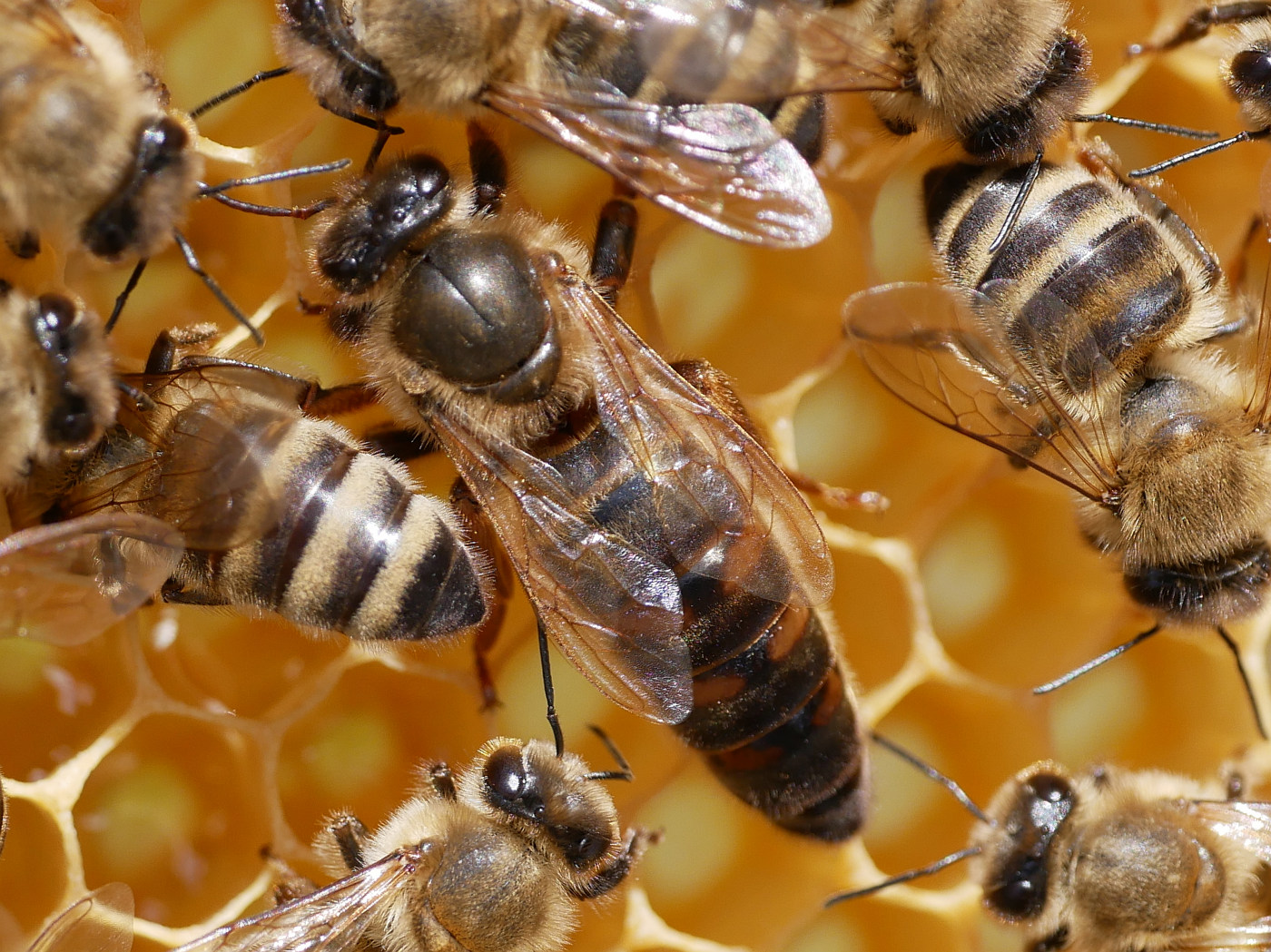 There is one queen living in a bee colony. She hatches after 16 days and is the only fertile female. She is recognizable by her size (15-18 mm), especially by her large, long abdomen. She mates on several nuptial flights during a one-time rutting season with around 10-20 drones. After that, she carries the sperm supply in her seminal sac for the duration of her life (2-5 years). From February to the end of September she lays 500 to a maximum of 2,000 eggs a day – in one year about 150,000 eggs, which weigh about 60 times as much as she does. She lays either fertilized eggs (females – workers and future queens) or unfertilized eggs (drones).

In addition to laying eggs, she ensures the cohesion of the colony by secreting pheromones – messenger substances that have an attractive effect on the workers and encourage them to work. She does not even have to look for food herself because the workers care for her. Her mouthparts and collecting devices have degenerated due to the lack of usage.

If a colony wants to divide (swarm), it usually prepares several queen cells. Before these new queens hatch, the old queen leaves the hive with about half the colony. If several new queens hatch a few days later, a fight ensues, because in the end there can only be one.

Worker bees develop during 21 days. In contrast to the queen, they have stunted sexual organs and are therefore smaller (11 – 12 mm). They have to take care of all the work that needs to be done in the bee colony. The indoor and outdoor tasks are performed sequentially depending on their age. The reason for that is that depending on the age the necessary organs for the work gradually become functional.

The feeding glands in the head of the workers are well developed up to 10 days after hatching. Their main task during this time is the care and feeding of the maggots. Each worker can raise only three larvae due to the maintenance effort (2,000 visits per maggot). From the 10th day to the 16th day, the fodder juice glands are reduced, but the wax glands on the abdomen are active. At this age, the workers build comb and cap the cells. The bee works as a guardian at the flight hole between the 17th and 20th day of life. From around the 21st day of life, the worker bee is busy collecting nectar, pollen, water and plant resins in the field. She does this work for about 5 to 6 weeks until the end of her life. 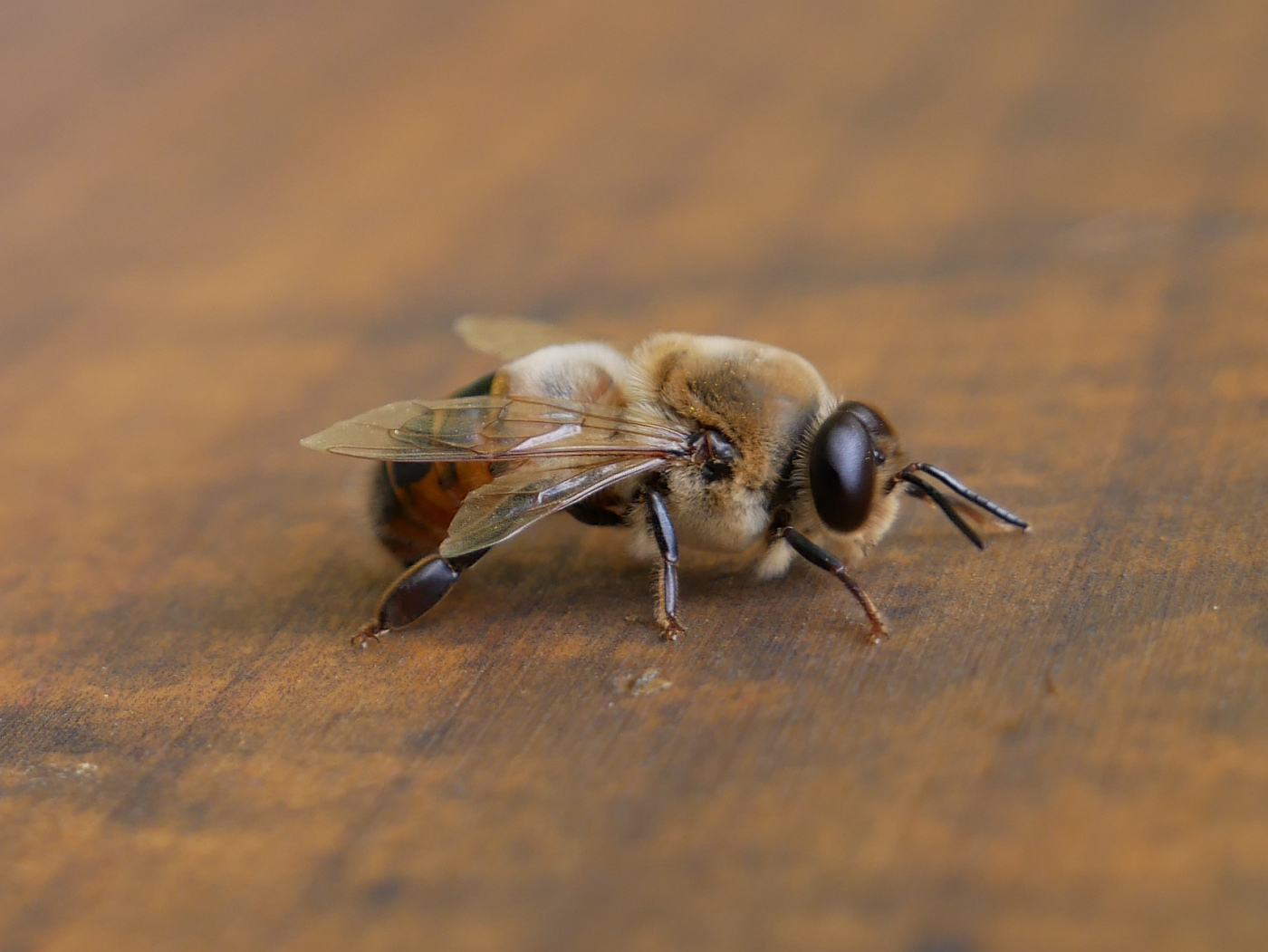 The drones arise from unfertilized eggs. Their development time is 24 days. They are bigger than the other bees (length: 13 – 16 mm). Their only job is to mate with young queens during their nuptial flight. Therefore, their genitals are very well developed as well as their strikingly large eyes, which they us to recognize the queen during her flight from afar. Their trunk is shortened and collecting devices and spines are missing. They do not help the workers doing their jobs and even have to be fed by the workers. The drones only live for a few weeks. They die during mating. Those that have not succeed to fertilize a queen are no longer needed in the fall. They are dragged from the hive (drone battle) where they die.

Together they are strong … 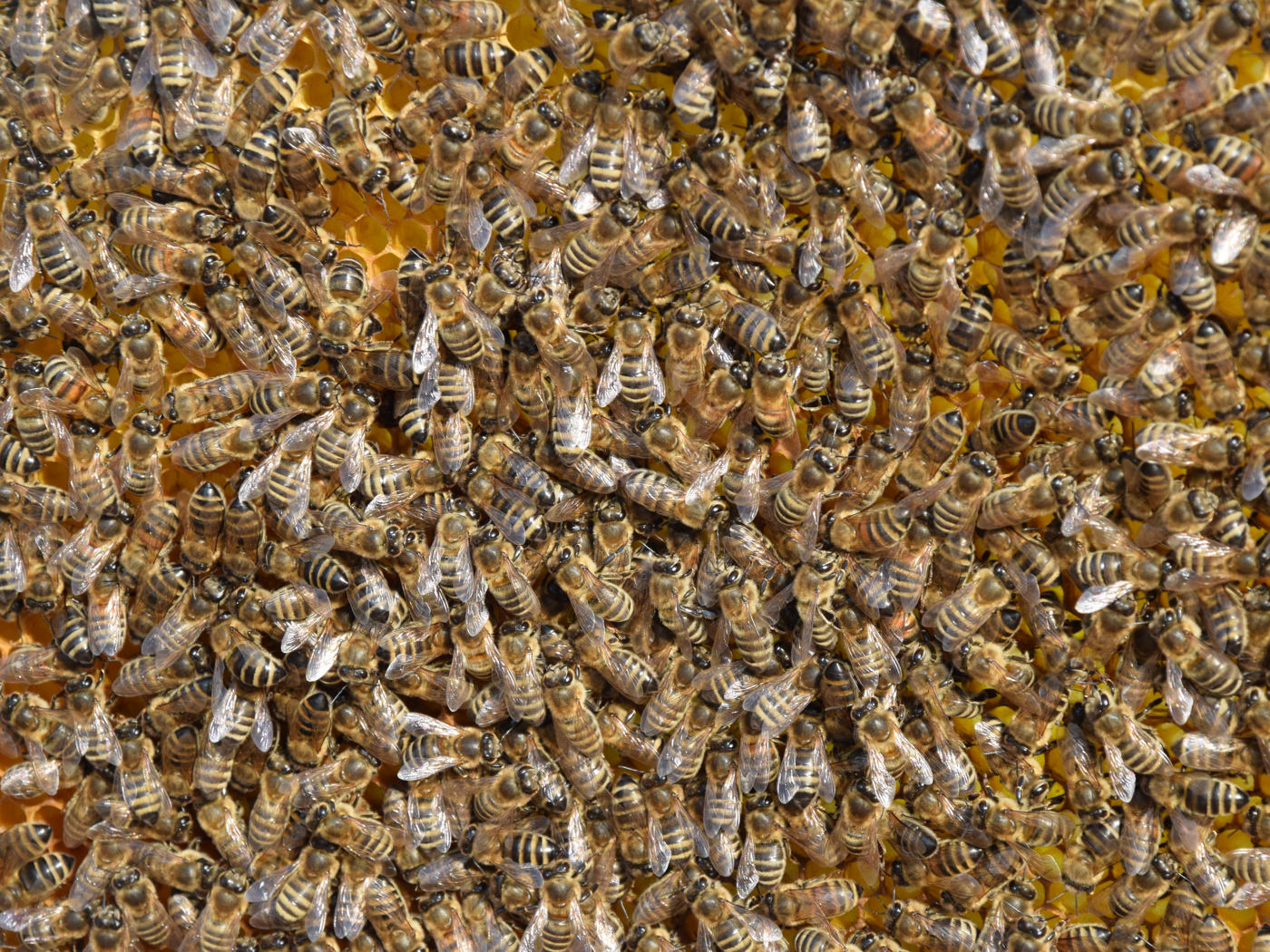 While it is storming, raining or snowing outside, the bee colony has gathered into a cluster in the hive, inside which the queen is waiting for spring. Collection flights have been discontinued, no honey is produced and no pollen is stored anymore. What looks like hibernation from the outside is actually hard work: 10,000 – 20,000 bees tremble through the winter to heat the hive and keep the temperature. They tremble with the biggest muscles they have, the flight muscles, until their chest is heated up to 44 degrees Celsius. In order to not create any disturbing wind, the wings are simply disengaged, the muscles run idle. Like the heater in a car.

If the bee is heated up, she crawls inside the cluster – and is later pushed back out again by the following hotter bees. This interplay lasts until spring, day and night, without a break.

Only because the whole hive survives the winter, it is possible to have enough insects to pollinate the first large blossom in spring. Many other bee species are still building up their populations at this point.

In summer the bee colony “sweats”. Specialized bees spread liquid around the hive and fan their wings, evaporating the water and bringing fresh air to the colony. 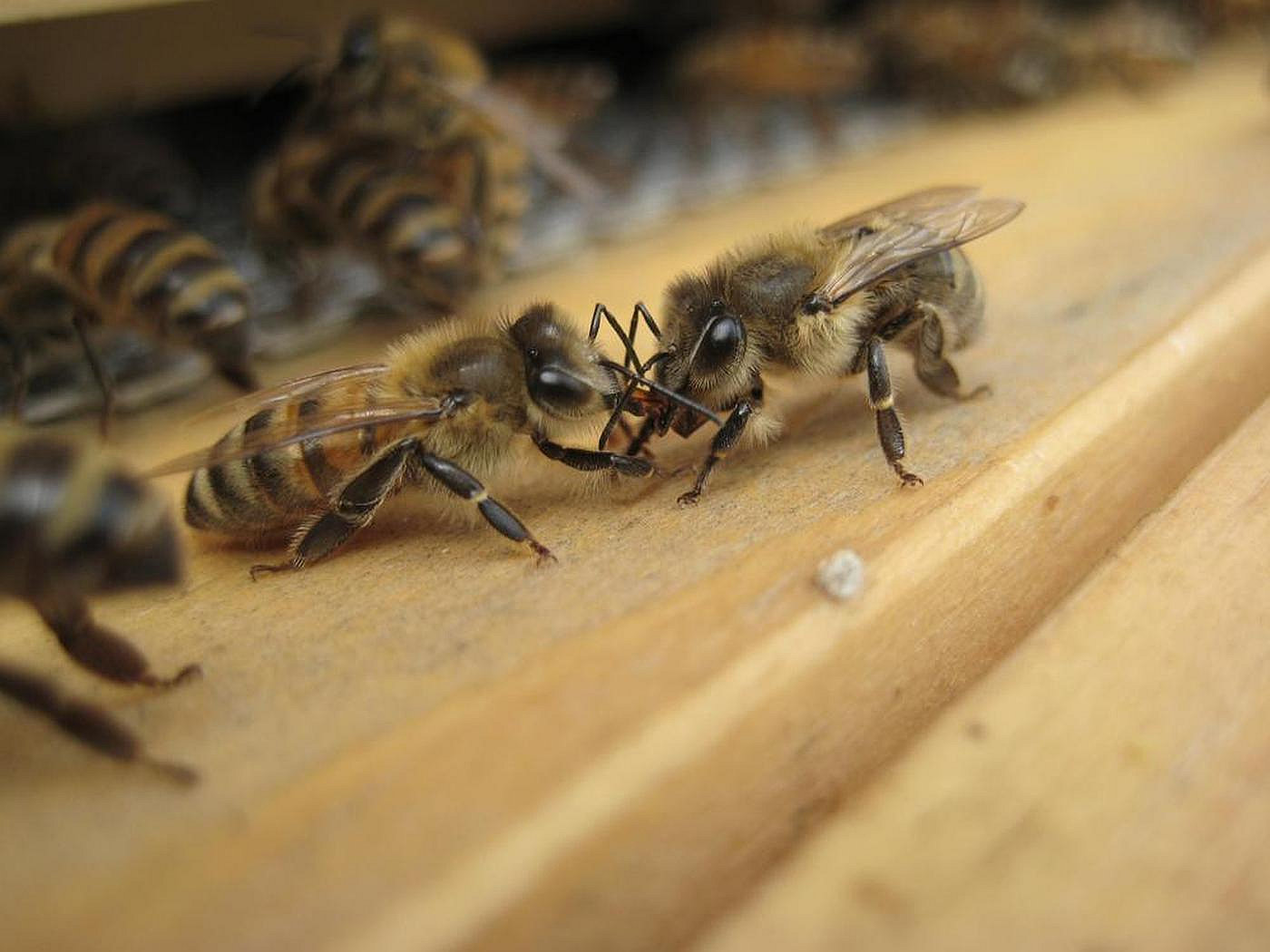 Each individual bee has a brain that is connected with  the others. Just as the nerve cells in the human brain cannot store any information individually and only become “smart” in combination. To do this, they have to communicate – this happens all the time and everywhere. Whenever two bees meet, they exchange information – in the form of nectar, smells or even movements. The beehive is a permanent information exchange.

The location and abundance of food sources can be reported in the following way: If an attractive food sourceis found within a radius of approx. 80 m, i.e. in the immediate vicinity, the data is passed on to the bees involved in a round dance. To do this, a bee begins to walk in tight, eight-shaped circles on the honeycomb after she has fed on the food, which she has brought with her. If the food source is further away, the forager bee performs a waggle dance. She walks a semi-circle on the combs, returns straight to the beginning, walks another semi-circle in the other direction, walks back on the straight line, etc. On the straight line, she wags her abdomen more or less intensively. The dance tempo indicates the distance, e.g. at a distance of 500 m, 6 waggle runs in 15 seconds, at 5 km only about two runs. The direction in which the food can be found is represented by its orientation to the sun. The bee represents the angle of the tail distance to the vertical of the comb in relation to the position of the sun. If it moves downwards, the workers must fly away from the sun. When the source is located in the direction of the sun, the gatherer dances upwards. 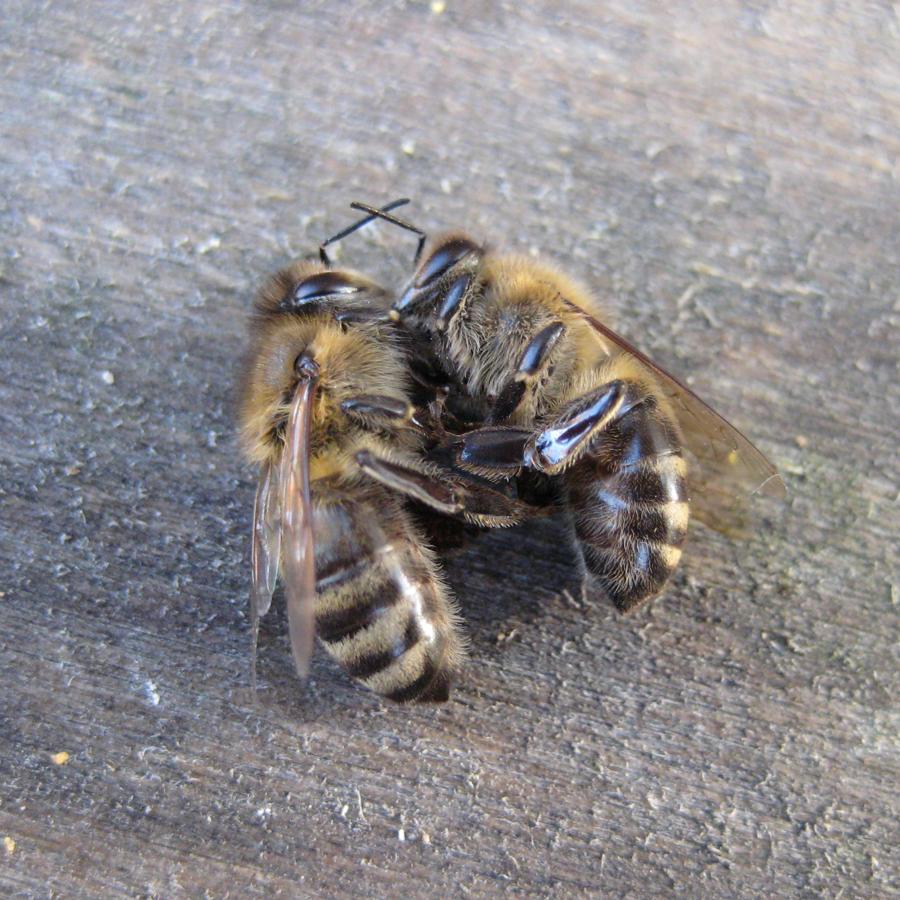 A large number of parasites, fungi, bacteria and predators make life difficult for the bees. The biggest bee pest is the varroa mite – it is their number one enemy.

The varroa mite (Varroa destructor) reproduces and develops in the brood cells of the honeybee, which damages their larvae as they grow and infesting adults after this. Furthermore, they are transmitting diseases, weaken and even kill the bees. The infestation of a hive by the varroa mite is called varroosis. It is regarded as the main cause of the epidemic-like death of bees in autumn and winter.

Nowadays it is assumed that all colonies are affected. The only question is how strong. The only exception is Australia, because they have strict quarantine regulations. In all other parts of the world, the varroa is present in honeybee colonies.

Even 7,000 years ago, the people living in the Stone Age were busy extracting honey, as rock drawings show. The wild honeybees built their nests in hollow trees or other cavities. In ancient times, bees were domesticated as production animals by beekeepers and kept in wooden boxes or baskets. The Chinese, Greeks, Romans and Egyptians all worked with beehives made of straw and clay. These hives had built-in combs and yielded only a small harvest, but several hives could be set up in a variety of locations.

In the 1950s there were around 2.5 million bee colonies in Germany, but today there are only around 750,000 bee colonies left, which are kept and cared for by 110,000 beekeepers (Information about beekeeping). According to the German Beekeepers’ Association, German bees are among the most industrious in the world, because each bee colony produces an average harvest of 20 – 30 kg of honey a year, and in good years even more.

Out of an estimated 100 plant species that provide over 90 percent of human nutrition, 71 are pollinated by honeybees. In Europe, this includes 84 percent of the 4,000 known types of vegetables and 264 types of grain, the yield of which is up to five times higher than that of species that do not require insects (wind pollination). The honeybees also pollinate around 80 percent of crops and wild plants from carrots to pumpkins and clover. The honeybee is therefore a very important farm animal. The Federal Environment Agency rates them as the third most important livestock after cattle and pigs. 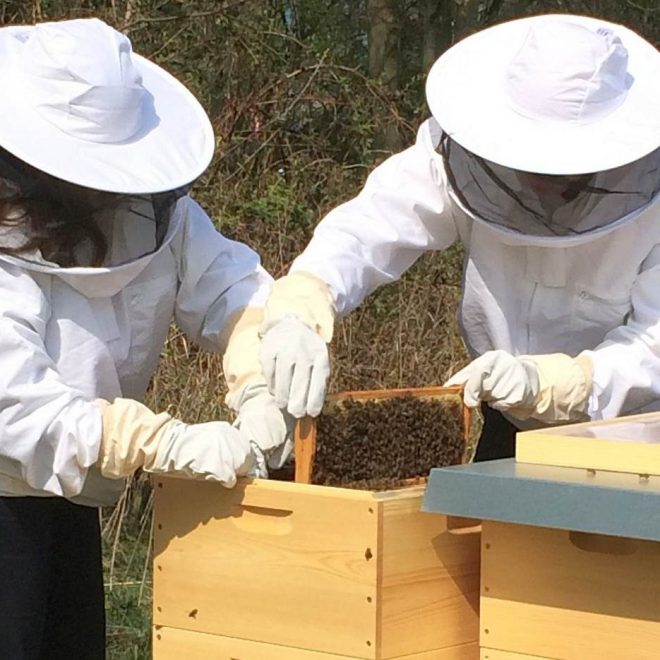 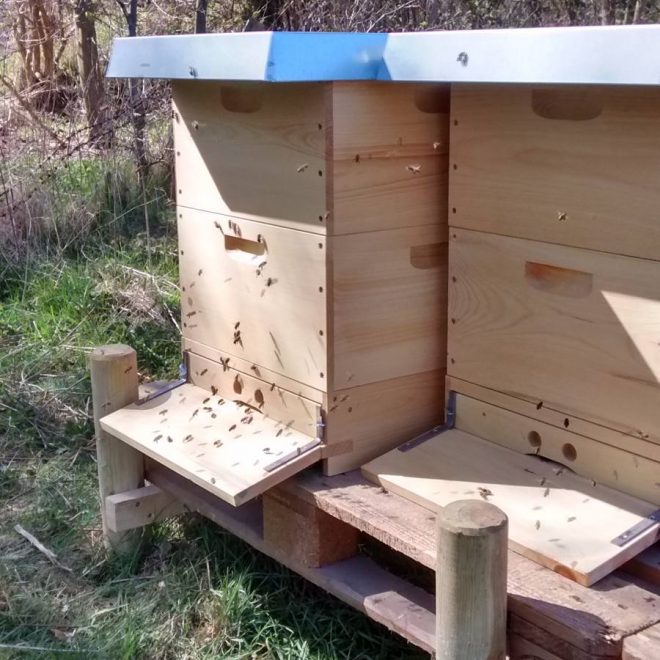 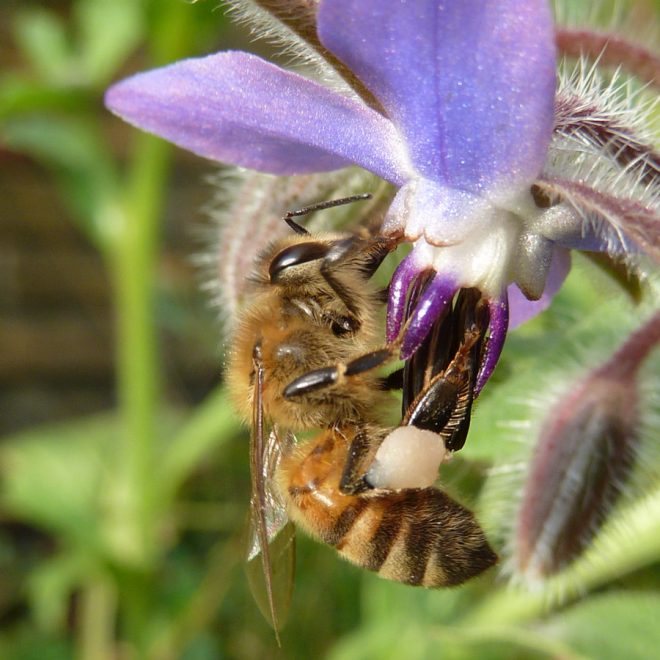 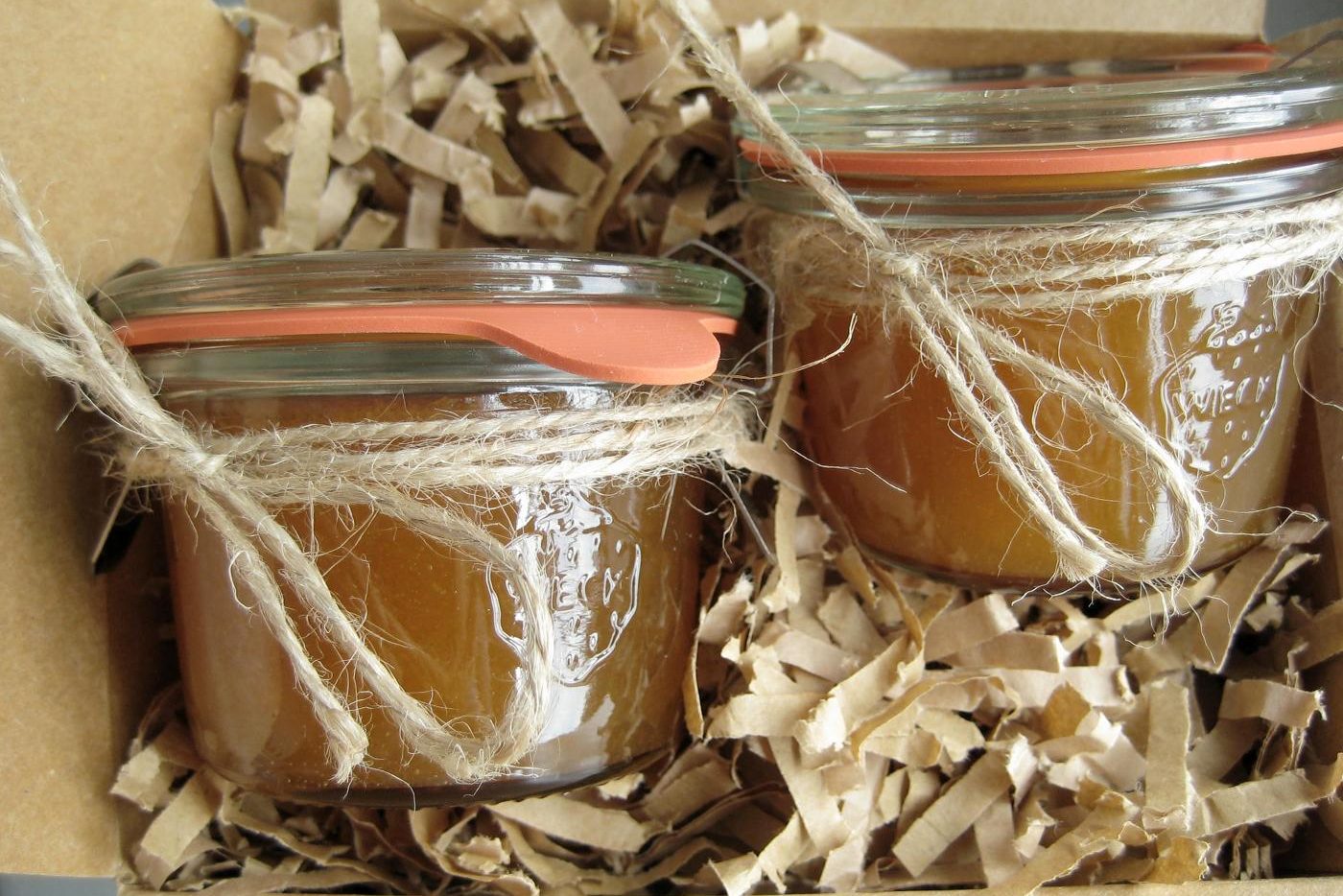 The worker bee stores sugary secretions (nectar) from flowers, leaves, fruits or aphid excretions in the crop (honey stomach). The nectar is thus carried into the hive and handed over to the bees working inside. By adding their own “bee substances” and by means of water evaporation the honey in the combs is thickened. This “processed” nectar is stored in the honeycomb where it can mature.

Still, honey is more than just food. It is also used, for example, as a remedy for many diseases. The wax produced by the bees is even more precious (1 kg is produced by about 150,000 bees in their lifetime). Today it is used less for candles and more for cosmetic and pharmaceutical purposes.